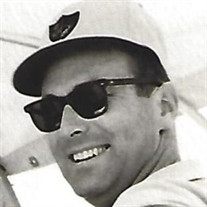 Burial services for Albert E (Al) Basinger Jr., 88, are scheduled for 11 a.m. Tuesday, June 23, at Memorial Park Cemetery in Bartlesville, OK. Al was born Nov. 5, 1931, in Joplin, MO, the son of A.E. Basinger Sr. and Mildred MacDonald Basinger. From his early years it was clear Al loved his gift of life and thoroughly enjoyed the people in it. In his senior year, his family moved to Bartlesville where Al worked for his dad, an early day waterflooder in Nowata County, while attending high school. Once he discovered the University of Oklahoma, Al knew he had found the right place. Al received his degree in geology from OU and served in the Air Force for three years. Upon returning to Bartlesville, he realized there were few job opportunities, so he got a truck and an oil lease in Osage County where he drilled his first well. Fortunately, it was successful. Al married the former Ann Brewer in 1963 and they began 56 years of marriage. They had two sons, Joe and John. During those years Al concentrated on learning new oil production techniques while enjoying his family and surviving economically. He joined Rotary Club and served on several local boards, including the hospital and bank, and continued his friendships in the oil patch and in town. He especially relished his long involvement with the Geology Council at his alma mater, and reunions with Alpha Tau Omega, his college fraternity. The family traveled to Norman, OK, for almost every OU Sooner home game, all becoming and remaining big fans. During this time, he also modified and received a patent on a downhole drilling tool, which was manufactured in Bartlesville and often used in Al’s wells. These ventures increased his business and personal experience. He emphasized that meeting people of widely differing interests and opinions was fascinating, because he loved to tell good stories and hear them in return. For his part, Al didn’t mind admitting he loved boats and planes, fast cars, fine clothes and fancy dining. His taste ran to unpretentious men, witty women, single malt whiskey and mild cigars. He possessed a deep and appreciative laugh which could not be duplicated. While his lifestyle would not suggest an active religious life, Al believed deeply and never doubted his faith would steer him in the right direction. Al is survived by four sons: Steve (Joyce) of Colorado, Mark (Norma) of Arkansas, Joe (Rayna) of Oklahoma, and John (Meg) of New Jersey. Grandchildren are Matthew, Storm, Rush, Lexi, Maria, Tommy, Ella and Cormac. The family is grateful for help during the past several years from BIOS, especially Alisha Littlesun, and from Cornerstone Hospice. Memorials may be sent to the Bartlesville Community Foundation, 208 E 4th St, Bartlesville, OK 74003. Or, as Al suggested, “Just give somebody a nod and a sincere smile as you pass by.” Services are under the direction of Carter Davis and the Davis Family Funeral Home & Crematory – Walker Brown Chapel. Online condolences and remembrances may be shared at www.DavisFamilyFuneralHome.com.

The family of Albert Earnest Basinger Jr. created this Life Tributes page to make it easy to share your memories.

Send flowers to the Basinger family.