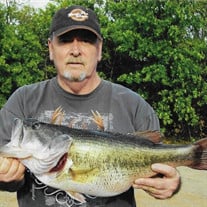 Allen Leroy Lynch, 72, lifelong Bartlesville resident, died Sunday in Bartlesville. Allen was born the son of Alvin Dwight and Lorena May (Thornbrough) Lynch on August 17, 1947, in Bartlesville. He was raised on the westside, growing up on Bucy Avenue where the neighborhood boys became known as the Bucy Boys. Later in life Allen was instrumental in organizing the Westside Reunion held annually after Labor Day for all the original westside kids to come together and reconnect. Allen worked for Central States Business Forms for many years before joining his brothers in the construction business and most recently he operated Al’s Handyman Service. Allen had many passions in life revolving around family and sports. He enjoyed playing baseball when he was younger and in later years, competitive softball. He coached many of his kids’ ball teams and was always interested in their many activities. Allen was an avid fan of Oklahoma University (OU) sports and the New York Yankees. Hunting and fishing were favorite pastimes which he shared with his kids. Friday nights were reserved for date nights and he would take his sweetheart Kathryn out for a night on the town. Allen is survived by his father Alvin Lynch and Jean of Bartlesville; four children, Travis Lynch and Kristy of Bartlesville, Christina Spriggs and Chris of Bartlesville, Travis Richmond and Rachel of Albuquerque, NM, and Yogi Lynch of Bartlesville; significant other Kathryn Lynch of Bartlesville; two brothers Jerry Lynch of Copan, and Randy Lynch of Texas; and seven grandchildren, Amber Crow and Josh, Austin Lynch, Alex Schenck and Jessie, Luke Spriggs, Andrew Wilson, Tyler Wilson, and Conor Richmond. He is preceded in death by his mother Sweetie, and brother Tommy Lynch. A family and friends gathering will be held at the Davis Family Funeral Home – Walker Brown Chapel, 918-333-7665, 4201 Nowata Rd, Bartlesville, on Wednesday, August 21, from 6-8 p.m. Visitation will also be held on Wednesday from 9 a.m.-8 p.m. Services are under the direction of Carter Davis and the Davis Family Funeral Home – Walker Brown Chapel. Online condolences and remembrances may be shared at www.DavisFamilyFuneralHome.com.

Allen Leroy Lynch, 72, lifelong Bartlesville resident, died Sunday in Bartlesville. Allen was born the son of Alvin Dwight and Lorena May (Thornbrough) Lynch on August 17, 1947, in Bartlesville. He was raised on the westside, growing up on... View Obituary & Service Information

The family of Allen Leroy Lynch created this Life Tributes page to make it easy to share your memories.

Send flowers to the Lynch family.