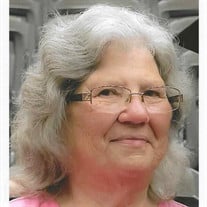 Alta Faye Lindley, 82-year-old Bartlesville resident, passed away Friday, September 17, 2021, among family in Dewey, OK. Alta will be remembered by family and friends as an outspoken, strong-willed lady. Alta was born August 1, 1939, to Joseph M. and Jesse M. Brady in Welch, OK. She was a middle child of 10 and was raised on a farm near Welch. Alta grew up among her brothers and sisters caring for livestock and learning to sew. She attended Diamond-Point grade school and later graduated Nowata High School in 1958. Alta was married twice, raising her son in Nowata, OK, before relocating to Dewey, OK, around 1965. Alta was known for her quilting ability, and over the years presented numerous creations to family and friends, and donating to multiple local charities. Through her own struggles in life, Alta cared for all she knew and helped many friends, family members, and neighbors. After leaving her long-term employer Med Source in 2000, Nanny Alta cared for her great-grandchildren through retirement. Above all else, Nanny Alta loved and was loved dearly by her son, grandchildren, and great-grandchildren. Memorial Services will be Friday, September 24, 2021, at 10 a.m. at the Davis Family Funeral Home & Crematory – Walker Brown Chapel, 918-333-7665, 4201 Nowata Rd, Bartlesville. Survivors include one son David and wife Kathy Lindley of Dewey, OK; three grandchildren, Justin and Jerrie Lindley, Jessica and Shane Bingham, and Jason and Stephanie Lindley; and seven great grandchildren: Brandi, Justin, Christopher, Landon, Bryce, Marisha, and Makauley. She also is survived by one brother Lee Brady, and four sisters, Elaine Goff, Joan Brewer, Marie Hogie, and Uleta Reynolds. Alta is preceded in death by her parents Joseph M. and Jessie M. Brady; three brothers, Melvin Brady, DeWayne Brady and Jimmy Brady; and one sister Bonnie Holt. Services are under the direction of Carter Davis and the Davis Family Funeral Home & Crematory – Walker Brown Chapel. Online condolences and remembrances may be shared at www.DavisFamilyFuneralHome.com.

The family of Alta Faye Lindley created this Life Tributes page to make it easy to share your memories.

Send flowers to the Lindley family.