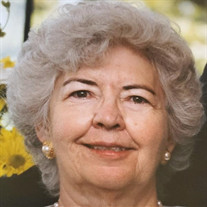 Ann Schultz, 88, passed away in Tulsa, Oklahoma on February 19, 2021. Ann Young was the first of three daughters born to Mallie Ann Dawes (Rahm), and Frank Young on July 22, 1932. She was always the dependable older sister who even at the young age of four would walk to the store alone to buy groceries for the family. Born during the Great Depression, she learned the importance of frugality, and taught her children to be resourceful, industrious, and grateful. Ann enjoyed music; she learned to play the piano and accordion at an early age and continued to play both instruments throughout her life. She graduated from Oklahoma A&M where she joined Alpha Chi Omega sorority. While at A&M, she met fellow student and cadet officer Robert Schultz. In May 1953, Ann married Robert Schultz. After teaching several years in the public schools, she selflessly devoted her life to raising their five children. A petite dynamo, always juggling a myriad of tasks, Ann made motherhood appear effortless. Due to her husband’s lifelong career with Phillips Petroleum Company, the family moved over a dozen times. More than a trailing spouse, Ann facilitated her family’s travels and moves both domestic and abroad. She would learn about a job transfer on Friday afternoon and by the next week, she would have listed the house, interviewed moving companies, and sorted out major logistics. Ann volunteered in several civic and church organizations including Assistance League of Tulsa, Parent Teacher Association, Ballet Guild and American Cancer Society. She was also a proud financial contributor to the Little Light House of Tulsa, Special Olympics, and her beloved Republican Party. Ann’s family will miss her impish wit, motherly advice, and grace. She is survived by her four children and their spouses: David Schultz, Gretchen and Mike Fugett, John and Lori Schultz, and Kristen and Eric Johnson; six grandchildren: Thomas Fugett, Andrew and Naghmeh Fugett; Kristen, Jacob and Emily Schultz; and Willard Johnson; and 1 great grand-daughter Devon Schultz. She is also survived by her two sisters Frankie Walters and Kay Davidson. Ann was preceded in death by her husband, her youngest daughter Heidi Murray, and her brother Gary Rahm. In lieu of flowers, donations may be made to the Jenks Special Olympics, c/o Mark Duesler, 423 N Gum St, Jenks, OK 74037. Services are under the direction of Carter Davis and the Davis Family Funeral Home & Crematory – Walker Brown Chapel in Bartlesville. Online condolences and remembrances may be shared at www.DavisFamilyFuneralHome.com. A service celebrating Ann’s life is scheduled for Tuesday, February 23, 2021 at 2:00pm in the Walker Brown Chapel. A public viewing is available Monday, February 22, 2021 from 10:00am to 8:00pm and Tuesday, February 23, 2021 from 9:00am to 1:00 pm.

Ann Schultz, 88, passed away in Tulsa, Oklahoma on February 19, 2021. Ann Young was the first of three daughters born to Mallie Ann Dawes (Rahm), and Frank Young on July 22, 1932. She was always the dependable older sister who even at the young... View Obituary & Service Information

The family of Ann Schultz created this Life Tributes page to make it easy to share your memories.

Send flowers to the Schultz family.