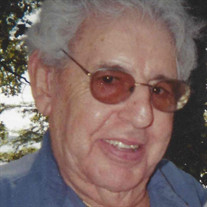 Armand was born April 30, 1929, in Dewey, OK, to Tómas and Josefa Villarreal. He was raised in the Dewey and Bartlesville areas, attending local schools. He served in the U.S. Army 1946-’47. On July 29, 1950, he wed the love of his life Margurite Smith and they enjoyed more than 65 years of marriage together until she preceded him in death in 2017. 1950 was a red-letter year for Armand - the same year that he got married, Armand began his 40 plus year career with the National Zinc Company , and also worked as a cement contractor – A & W Concrete – for many years. Armand loved to fish, dance, attend family gatherings, and share the produce from his wife’s garden! He enjoyed storytelling – some real, some embellished and not all about the fish that got away! He was a dedicated member of the Ramona Masonic Lodge #326 for more than 50 years – a significant milestone and honor for a Mason. Armand chose to reconfirm his salvation by being baptized October 30, 2011, at Highland Park Baptist Church in Bartlesville, witnessed by those who loved him. Armand is survived by his daughter Dianne Aultmann and husband Byron of Rapid City, SD; daughter-in-law Carol Villarreal of Bartlesville; three grandchildren Aidan, Jessica, and Lara; 4 great grandchildren; as well as his siblings Oscar Villarreal and his wife Georgia of Dewey, Ray Villarreal and his wife Blanche of Tulsa, OK, Mary Brown of Columbus, IN, Rachel Antle and her husband Don of Bartlesville, Armida Villarreal of Tulsa; and numerous nieces and nephews. Preceding Armand in death were his parents, wife Margurite Villarreal, son Tom Villarreal, grandson Adam Wooddell, great grandson Dellon Cunningham, and 10 siblings Benito, Rodolfo, Gilbert and Paul Villarreal, Manda Hurtado, Aurora Heredia Barajas, Tomasita Samaripa Heard, Clara Bramlett, Lucy Marshall and Ortencia Macheras. In lieu of flowers, donations can be made to: Highland Park Baptist Church, Sound Equipment Fund, 300 SE Washington Boulevard, Bartlesville, OK 74006. A graveside service will be held at 10:30 a.m. Wednesday, July 29, 2020 in the Ramona Cemetery, Ramona, OK. Services are under the direction of Carter Davis and the Davis Family Funeral Home – Dewey Chapel. Online condolences and remembrances may be shared at www.DavisFamilyFuneralHome.com.

The family of Armand R. Villarreal created this Life Tributes page to make it easy to share your memories.

Send flowers to the Villarreal family.