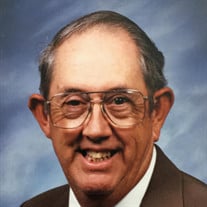 Barry Gene Bolden of Bartlesville, a loving husband, proud father, brother, uncle and American veteran, was 84 when he died Monday in Columbus, KS. Barry was born the son of Walter Ivan and Fern (Ingram) Bolden on January 8, 1937, in Cherryvale, KS. While growing up, Barry learned the value in a hard day’s work - he often sought out day work in order to gain experience in life as well as for personal satisfaction. Barry graduated from Cherryvale High School in1955 and worked at a filling station before entering the U.S. Army serving in the intelligence office in Houston, TX from December 1959 to March 1962. He achieved the rank of Specialist 4th Class. After getting permission from his commander, he returned to Cherryvale to marry the love of his life Jeanette Wheatley, and they united in marriage on June 25, 1961. The Boldens made their home in Pittsburg while Barry attended radio and TV repair courses. In 1964 they moved to Bartlesville for a job at Montgomery Ward’s repairing TVs, then worked on small engine repairs. Once the store closed locally, Barry went on to Madison Middle School to serve as a custodian until retiring in 2002. After 55 years of loving marriage Jeanette preceded him in death. In 2018 Barry moved to Columbus in SE Kansas to live across the street from his son James. Barry and Jeanette enjoyed camping and trips to their property at Grand Lake. It was a passion that they enjoyed from when their kids were young through retirement. Barry was handy and built many sheds and play structures for his family, oftentimes in sections which were then transported to the final destination and assembled. Barry loved to watch football. He was an avid Dallas Cowboy fan and loved to go support the Columbus Titans while living in Columbus. Barry loved the Lord and was active in the various ministries of his home church the East Bartlesville Christian Church. Everyone who knew Barry loved him - he was a kind man with a great sense of humor, and easy to love. He will be dearly missed. Barry is survived by his two sons, James Richard (Patty) Bolden and Charles Scott Bolden; brother Dennis (Susan) Bolden; brother-in-law John Ross; sister-in-law Stella Bolden; three grandchildren, Aaron (Stephanie) Overbey, Jennifer (Tony) Calvert and Whitney Bolden and fiancé Shane Chrisman; three great grandchildren, Dexter, Daegan and Eowyn. He is preceded in death by his beloved wife, parents, brother Bill Bolden, sister Sylvia Ross and daughter in law Lynn Bolden. Barry’s family will receive friends at the Davis Family Funeral Home & Crematory – Walker Brown Chapel, 918-333-7665, 4201 Nowata Rd, Bartlesville, on Sunday, from 3-5 p.m. Visitation will also be held on Sunday from 12-5. Funeral services will be held 10 a.m. on Monday, at the East Bartlesville Christian Church, with Evangelist David Bycroft officiating. Interment will follow in the Memorial Park Cemetery. Services are under the direction of Carter Davis and the Davis Family Funeral Home & Crematory – Walker Brown Chapel. Online condolences and remembrances may be shared at www.DavisFamilyFuneralHome.com.

Barry Gene Bolden of Bartlesville, a loving husband, proud father, brother, uncle and American veteran, was 84 when he died Monday in Columbus, KS. Barry was born the son of Walter Ivan and Fern (Ingram) Bolden on January 8, 1937, in Cherryvale,... View Obituary & Service Information

The family of Barry Gene Bolden created this Life Tributes page to make it easy to share your memories.

Send flowers to the Bolden family.