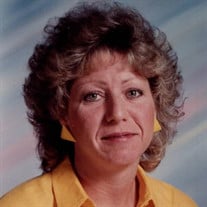 Rebecca Lura Arnett, 69, of Bartlesville, died Wednesday in Bartlesville surrounded by her loving family. Becky was born the daughter of Benjamin and Ollie Bell (Estes) Bailey on February 19, 1952 in Flippin, AR. The family lived in rural Arkansas before moving to Bartlesville, OK, when she was an infant. Becky attended Bartlesville schools, graduating from Sooner High in 1970. At the beginning of her life’s love story, Becky was dating Larry’s friend when they first met, but sometime later she became available and Larry was ready. Even though they attended different high schools, Becky and Larry were high school sweethearts. Just a few months after their graduations, they united in marriage on October 30, 1970 and went on to enjoy 51 years of loving marriage. Becky went to work with the Bartlesville Public Schools in the cafeteria for several years. Son Danny was convinced she did it on purpose to keep an eye on him because every time he changed schools so did she. When she wasn’t working or mothering at home, Becky and Larry enjoyed the outdoors and taking the family camping and fishing, whether locally or away like fishing for trout at Roaring River in Missouri with the grandkids. Becky was a devoted mother and doting grandmother, attending all the events they were active in, never complaining about her health woes that made things difficult. In her younger years Becky enjoyed sewing and making jewelry, and in recent years she specialized in spoiling everyone around her. Becky is survived by her loving husband Larry; three sons Danny (Rhonda) Arnett, Randy Arnett and Robby Arnett; two brothers Doyne (Mary) Bailey and Lonnie (Connie) Bailey; four grandchildren, Colton (Shelby) Lacey, Cody Arnett, Audrey Arnett and Austyn Arnett; and one great grandson Carson Lacey. She is preceded in death by her parents and sister Pearl Emmitt. Becky’s family will receive friends at the Davis Family Funeral Home & Crematory – Walker Brown Chapel, 918-333-7665, 4201 Nowata Rd, Bartlesville, on Sunday, from 3-5 p.m. Funeral services will be held 2 p.m. on Monday, at the Davis Family Funeral Home & Crematory – Walker Brown Chapel, with Pastor Bill Spencer officiating. Interment will follow in the Memorial Park Cemetery. Services are under the direction of Carter Davis and the Davis Family Funeral Home & Crematory – Walker Brown Chapel. Online condolences and remembrances may be shared at www.DavisFamilyFuneralHome.com.

The family of Becky Lura Arnett created this Life Tributes page to make it easy to share your memories.

Send flowers to the Arnett family.