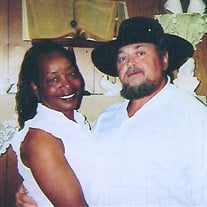 Bessie Hollandsworth, 67, of Bartlesville, went home to the Lord Wednesday in Bartlesville. Bessie Delores Danzy was born to Straughter Dixon and Doshan Danzy on May 16, 1952, in Thomasville, Clark County, Alabama. She was raised in the area and from an early age, she was her mother’s helper and helped care for her many siblings, especially after their mother passed away when Bessie was just 17. At that time Bessie and her two younger siblings moved to Massillon, Ohio, to live with their uncle. After graduating from high school in 1970 Bessie attended college for two years and earned her associate’s degree. She lived in Oregon City for more than 20 years, before moving to Bartlesville. Bessie worked as a cashier at Dollar General where she met Danny Hollandsworth, one of her customers at the store. They fell in love and were married two years later on Sept. 20, 2010. They made their home in Ochelata where they simply enjoyed the home life and country living out in the hills. Bessie loved raising chickens and growing flowers. Her farm consisted of up to 75 chickens, one peacock and several guineas. She was fondly known as the “Egg Lady” and earned a lot of faithful customers over the years, many of whom became friends. Danny and Bessie were inseparable from the time they met and they did EVERY-thing together. They loved each other and each other’s company. Most of all Bessie loved the Lord and the people around her. She always had something good to say about everyone. Bessie’s camera roll has over a thousand pictures which she loved and cherished. She will be dearly missed. Bessie is survived by her loving husband Danny of the home; son “KJ” Kaylon Jamar Pledger Danzy of Canton, Ohio, who was her heart; three daughters Daphne Sims and Barry Henson of Oologah, Rachel Hollandsworth of Dewey, and Amanda Burton and Jeff of Bartlesville; one grandchild Daniel Murphy of Owasso; three brothers Willie Pate of Aurora, CO, Charles and Trina Danzy of Massillon, OH, and Samuel Danzy of Columbus, OH; two sisters, Dorothy Danzy and Beatrice MacAfee and Buck, both of Detroit. She was preceded in death by her infant son John Henry Wooten the 4th, her parents, and three sisters Peggy, Shirley and Viola. Visitation is at the Davis Family Funeral Home – Dewey Chapel, 918-534-3030, 113 S. Osage (Hwy. 75), Dewey, on Tuesday, Sept. 24, from 10 a.m.-8 p.m. A private family service will be held before interment at Dewey Cemetery. Services are under the direction of Carter Davis and the Davis Family Funeral Home – Dewey Chapel. Online condolences and remembrances may be shared at www.DavisFamilyFuneralHome.com.

Bessie Hollandsworth, 67, of Bartlesville, went home to the Lord Wednesday in Bartlesville. Bessie Delores Danzy was born to Straughter Dixon and Doshan Danzy on May 16, 1952, in Thomasville, Clark County, Alabama. She was raised in the area... View Obituary & Service Information

The family of Bessie Hollandsworth created this Life Tributes page to make it easy to share your memories.

Bessie Hollandsworth, 67, of Bartlesville, went home to the Lord...

Send flowers to the Hollandsworth family.