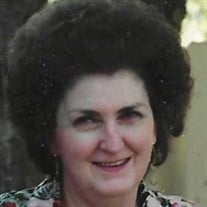 Betty Argo of Nowata, died Tuesday in Nowata. At 93, she had lived through and served during WWII, but her true calling was to care for the people around her, especially her beloved family. Betty was born the daughter of Fredrick Union and Ethel Beatrice (Lee) Barnett on July 27, 1927, in Fairfax, OK. She was raised in Fairfax and Pryor and while she was young, her father passed, and Betty became especially close to her mother. While attending a dance Betty was introduced to Paul Argo and they hit it off. Once he was honorably discharged from the Navy they united in marriage on Feb. 19, 1946. While Paul was serving Betty also served in the United States Naval Reserve (Women's Reserve), better known as the WAVES (Women Accepted for Volunteer Emergency Service), which was the women's branch of the U.S. Naval Reserve during World War II. Betty and Paul made their first home in Borger, TX, before moving to rural Washington County to their family farm in 1948 and into the home they built in 1956. Besides being a faithful wife and mother, Betty worked outside the home as a Southwestern Bell switchboard operator, at Vanderbilts, Wal-Mart, and for 20 plus years at the Memorial Hospital in food service. After 54 years of loving marriage Paul preceded her in death on May 25, 2000. Betty loved her family and enjoyed taking care of everyone and cooking big family dinners. Freda her sister was her best friend and they loved to run around together. Betty was a talented artist and loved to paint, but most of all she loved her boys and spending time with them. Betty is survived by her daughter in law Danielle Kay Argo; special grandson Dr. Kenneth Argo;, sister in law Deloris Barnett; six grandchildren and 21 great grandchildren. She is preceded in death by her husband, parents, three sons Steven John Argo, Paul Fredrick Argo and Bruce Allen Argo, three brothers and four sisters. Services are pending and will be announced by Carter Davis and the Davis Family Funeral Home & Crematory – Walker Brown Chapel. Online condolences and remembrances may be shared at www.DavisFamilyFuneralHome.com

Betty Argo of Nowata, died Tuesday in Nowata. At 93, she had lived through and served during WWII, but her true calling was to care for the people around her, especially her beloved family. Betty was born the daughter of Fredrick Union and... View Obituary & Service Information

The family of Betty Argo created this Life Tributes page to make it easy to share your memories.

Send flowers to the Argo family.