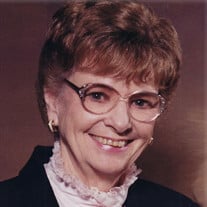 Betty Benefiel, formerly of Dewey, died Thursday, March 28, 2019, at her home in Broken Arrow. Betty was born on February 14, 1929 in Pawhuska, Oklahoma to Evelyn Sharp Bennett and Willis Bennett. She and Cliff Benefiel were married on February 7, 1948 where they established their home in Bartlesville and Dewey. She became a resident of Broken Arrow with her grandson, Richard. Betty was an employee of Phillips Petroleum for 37 years until she retired. She and Cliff enjoyed many years of RVing with the Benefiel family and traveling to numerous US locations. Betty and Cliff were members of Rose Hill Baptist Church and always enjoyed the wonderful fellowship and Pastor Moody’s sermons and caring for his flock. She is survived by her daughter Judy Benefiel Spears and her spouse Jon of Broken Arrow, her grandson Richard Spears of Broken Arrow, her granddaughter Stephanie Spears Perla, spouse Jourdan Perla and her great granddaughter Violet Isabella Perla of Davis, California. Two sisters Ada Waers and her nephew Bill Barnett of Broken Arrow, sister Jennie Weaver of Harker Heights, Texas, two brothers Frank Bennett of Skiatook and Jerry Bennett of Tulsa. She is preceded in death by her parents, husband Cliff in 2004, brother Willis Bennett Sr. and in-laws, William Benefiel, Mildred Burrows, William J. Yates, Betty Marshall and Dennis Stanberry. She shared many wonderful and cherished times with her Benefiel family which she is survived by Louise Benefiel Yates of Ponca City, Cleo Benefiel Stanberry, Dewey, Leo Benefiel, Bartlesville and Charley Marshall, Bartlesville. She and her families want to express their gratitude to St. John Hospice who assisted with her transition to her heavenly home. Graveside services will be held at 10 a.m. on Tuesday, April 2, at Memorial Park Cemetery in Bartlesville. Services are under the direction of Carter Davis and the Davis Family Funeral Home – Dewey Chapel. Online condolences and remembrances may be shared at www.DavisFamilyFuneralHome.com.

Betty Benefiel, formerly of Dewey, died Thursday, March 28, 2019, at her home in Broken Arrow. Betty was born on February 14, 1929 in Pawhuska, Oklahoma to Evelyn Sharp Bennett and Willis Bennett. She and Cliff Benefiel were married on February... View Obituary & Service Information

The family of Betty Jean Bennett Benefiel created this Life Tributes page to make it easy to share your memories.

Send flowers to the Benefiel family.