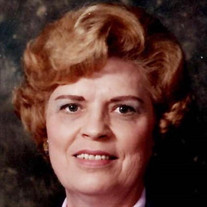 Betty Mae (Vinson) Melton, 92, of Dewey, passed away on Monday, May 2, 2022, in Bartlesville. Betty was born on October 5, 1929, in Osage County, rural Skiatook, Okla., to Silby M. Vinson, Sr., and Autie (Luttrell) Vinson. At the age of 2 years, Betty’s family moved to a farm between Ramona and Vera in Washington County. Betty attended school in Vera until mid-term of the fifth grade, when the family moved into the town of Ramona. She finished high school there, graduating with the Class of 1947. Following graduation, Betty did small jobs and then joined Phillips Petroleum Company in 1954. She attended Bartlesville Business School, taking evening classes and finishing in 1957. After 32-plus years at Phillips, Betty took early retirement in 1986. In April of 1971, Betty was married to R. W. “Bill” Melton. Betty and Bill enjoyed many wonderful years of love and happiness. Bill was a prominent builder in Bartlesville and the surrounding area. He loved to fly his small aircraft and they made many exciting trips throughout America. Bill preceded Betty in death on September 25, 1999. Following Bill’s death, Betty has remained living in retirement in Bartlesville, enjoying her time with her family and many wonderful friends. Betty is a longtime member of the First Baptist Church in Ramona; Eastern Star Chapter Number 370; a lifetime member of the Jane Phillips Sorority, and a member of close and special group known as the VIP’s. During Betty’s early marriage, she had one son, Ronald, from an early marriage and he preceded her in death on September 7, 2015. Betty is survived by her daughter-in-law, Rita Raines; granddaughter, Kimberly Raines Crawford and her husband, Mike; grandson, Ronald Raines II; great-grandson, Michael Crawford, Jr; brother-in-law, Carl Stewart; sister-in-law, Patsy Vinson; brother-in-law, Terry Melton and his wife, Darlene; several very close nieces and nephews and loving friends. She was preceded in death by her parents; husband, Bill; a brother, Bill Vinson, Sr.; a sister-in-law, Margaret Sears Vinson; and a brother-in-law, Johnny Melton and his wife, Kay Melton. Visitation will be held on Sunday, May 8, from 12-5 at the Davis Family Funeral Home – Dewey Chapel, 918-534-3030, 113 S. Osage (Hwy. 75), Dewey. In lieu of flowers, memorials may be made to Elder Care, 1223 Swan Dr., Bartlesville, OK 74006, or The Journey Home, 900 NE Washington Blvd., Bartlesville, OK 74006. Funeral services will be held at 10 a.m. Monday, May 9, at Davis Family Funeral Home – Dewey Chapel with Reverend Orville Moody officiating. Services are under the Direction of Carter Davis and the Davis Family Funeral Home – Dewey Chapel. Online condolences and remembrances may be shared at www.DavisFamilyFuneralHome.com.

The family of Betty Mae Melton created this Life Tributes page to make it easy to share your memories.

Send flowers to the Melton family.