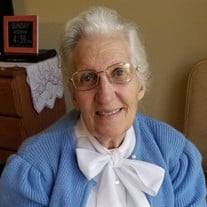 Mrs. Beulah Fern (Spohn) Conley, 87, of Loveland, Ohio, went peaceably to her heavenly home to meet her Lord and Savior on Thursday, September 9, 2021. Beulah was born the daughter of James ‘Luther’ and Lula Levina (Gates) Spohn on December 31, 1933, in Kenwood, OK. When she was about 11½ years old, her daddy put a down payment on a 40-acre farm outside of Jay, OK, where she and her nine siblings lived their growing up years. She tells of carrying water a ½ mile until her daddy drilled a well and finally struck a water vein at 400’. They built a barn and then chicken houses. They had kerosene lamps and she remembers when they changed to Aladdin lamps and said they were so much brighter. She tells of the times they would have “blackouts” and they had to make sure no lights were on in the house as the enemy planes were flying over. She was walking from the lunchroom in the school house she attended in Jay when she heard about Pearl Harbor being bombed by the Japanese. Beulah and her mother were very close, and her mother taught her how to embroider, crochet, and piece quilts. She pieced her first quilt top at a very early age. She loved helping her mother in the garden, picking huckleberries, canning fruits and vegetables, and also helping her daddy on the peanut farm. She accepted Christ on March 28, 1948, at 14 years of age at the Assembly of God Church, in Jay. Two of her siblings were saved about the same time and the three of them were baptized together. Beulah tells how she and her sisters quarreled a lot, but after finding Jesus, their conduct changed. After her Grandpa Gates passed away, Beulah lived with her Granny so that she wouldn’t be alone - she finished her last years of high school at Salina, OK, and then would come home during the summer. After graduating from high school, she then taught two years at Gravette Holiness Bible School in Gravette, AR. She was attending a camp meeting at the Bible School when her uncle, W. L. Gates, introduced her to a young man who had traveled from Covington, TN, to attend the camp and his name was Winford Conley. Their courtship began and after two years, they were united in marriage on May 16, 1954. They traveled by train on their honeymoon and that evening, went to a church. Her husband who had accepted the call upon his life at a young age to preach was asked to speak in that service. He not only preached, but Beulah played the piano and sang a special, and thus on the evening of their honeymoon, their ministry truly began. They ministered in the Church of God (Holiness) and spent more than 42 years in that ministry together. Over the years they faithfully pastored churches, including Salina, OK, Riverview and Hazel Green, MO; Memphis, TN; and Neosho, MO. Once her husband retired, they continued to fill in at various churches, revivals and camp meetings, including pastoring and traveling to Pittsburg, KS, on the weekends to help out a church there for a couple of years. Beulah faithfully and devotedly served her husband, her children, grandchildren, and was a friend to all she met. She was a full-time homemaker, but that included being a pastor’s wife, and taught years of Sunday School classes, sang and played the piano at church, was an excellent hostess, cook, gardener, canned fruit and vegetables, loved her flower gardens, an amazing seamstress, assisted in the honey business they owned, loved to crochet and embroider and make handmade gifts for her children and grandchildren. In addition, she taught music lessons to all four of us children and had her own private studio at home and taught hundreds of children and adults in piano, organ, guitar, and violin for over 30 years. This was how she supported her husband so all four of her children were able to attend private Christian school their high school years at Mt. Zion Bible School, Ava, MO. Beulah is survived by her four children, Dewayne Conley and Deana of Dewey, OK, Charlotte (Conley) Smith and Frank of Loveland, OH, Brenda Conley of Loveland, OH, and Gary Conley and Tricia of De Soto, KS; three siblings, Charles Spohn, Don Spohn and Phoebe, and Fred Spohn and Sharon; seven grandchildren, Heidi Hendricks and Bronc, Marci Rovenstine and Aaron, Alanna Ryder and Lucas, Andrew Smith and Sarah, Janette Fahlgren and Josh, Amanda Conley and fiancé Casey Keating, Cory Conley and Helena; and 10 great grandchildren, Tyler, Conner, T.J., Sawyer, Logan, Easton, Emerie, Alice, Mazie, and Levi. She is preceded in death by her parents, husband, Winford, and brothers, Martin, Howard, and Lloyd; sisters, Naomi, Gladys, and Cherry; and grandchild, Charles Leonard Bryan Smith, who died at 10 days old. Beulah’s family will receive friends at the Davis Family Funeral Home & Crematory – Walker Brown Chapel, 918-333-7665, 4201 Nowata Rd, Bartlesville, on Friday, September 17, from 6-8 p.m. Visitation will also be held on Friday from 10-8. In lieu of flowers, memorials may be made to the Mt. Zion Bible School, “In Memory of Beulah Conley”, Rr 1, Box 48, Ava, MO 65608. Services will be held 10 a.m. on Saturday, at the Davis Family Funeral Home & Crematory – Walker Brown Chapel. Interment will follow in the Ball Cemetery in Childers. Services are under the direction of Carter Davis and the Davis Family Funeral Home & Crematory – Walker Brown Chapel. Online condolences and remembrances may be shared at www.DavisFamilyFuneralHome.com.

The family of Beulah Fern Conley created this Life Tributes page to make it easy to share your memories.

Send flowers to the Conley family.