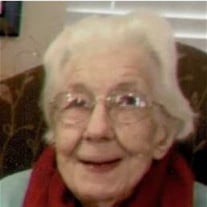 Beulah Taylor, life-long resident of the Bartlesville area, peacefully passed away on Friday, October 9, 2015. She was 94 years old. Services will be held at 2:00 p.m. Wednesday, October 14, 2015 at the Oglesby Assembly of God Church with Reverend Alfred Pearson officiating. Interment will be in the Oglesby Cemetery. Arrangements are under the direction of Walker-Brown Funeral Home. Beulah Blanche Taylor was born December 28, 1920 to Jess and Lova May (Gougler) Taylor at Oglesby, Oklahoma--the oldest of their 12 children. Her childhood was spent in Oglesby, surrounded by parents and grandparents where she attended the Oglesby School. After schooling, she worked for neighbors, Mrs. Grindle and Mrs. Minnick. In the early 1940's, Beulah and her sister, Emmabelle, took jobs with Douglas Aircraft in Tulsa. They moved to Tulsa to work and supported the war effort as so many other women did at that time. They came home as often as possible, always to the delight of their younger siblings bringing something for everyone. In February, 1946, Beulah went to work for Southwestern Bell in Bartlesville and worked for that company until she retired June 13, 1978. After retirement, she cared for her ailing father until his death in 1980. She was a life member and supporter of AT&T Pioneers. Beulah was a strong Christian and attended the Assembly of God Church. Throughout her life she was active in church work and activities--as a youth leader, Sunday school teacher, women's activity leader, and church secretary/treasurer. She freely gave of her time to others and also served as secretary of the Oglesby Cemetery Board. Her hobbies included caring for her home, gardening, quilting and enjoying outdoors. In May of 2004 Beulah sold her home and moved to the Independent Care Center. This was a real adjustment after living for 38 years in the same house. She moved to the Sterling House in 2014. Beulah is survived by her siblings: Gladys Nichols of Nowata, Vernon Taylor and wife Charlotte of Bartlesville, Mavis Cederberg of Bartlesville, Les Taylor and wife Joyce of Sunray, TX, Kenneth Paul Taylor and wife Gerri of Bartlesville, David Taylor and wife Gayla of Bartlesville, Nancy and husband John Melendez of North Venice, FL along with 21 nieces and nephews and many friends. Beulah was preceded in death by her parents, brothers; Tommy and Bob Taylor, sisters; Emmabelle Pierce and Opal Hutton. Her life was filled with family and friends. She did not forget birthdays, holidays and special family occasions. Her home was like a second home to many family members. Thank you, Beulah, for being there for all of us. Casket Bearers will be: Les Taylor, David Taylor, Willie Taylor, Paul Ray Taylor, Mike Morris & Simon Trautmann.

Beulah Taylor, life-long resident of the Bartlesville area, peacefully passed away on Friday, October 9, 2015. She was 94 years old. Services will be held at 2:00 p.m. Wednesday, October 14, 2015 at the Oglesby Assembly of God Church with... View Obituary & Service Information

The family of Beulah Taylor created this Life Tributes page to make it easy to share your memories.