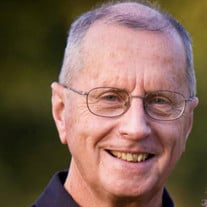 Bill J. Mingle, age 79, of Norman, Oklahoma, died on Saturday, March 5, 2022. He was born on December 12, 1942, to Harry E. and Myrtle (Brown) Mingle, at the family farm home southwest of Labette City, in rural Labette County, Kansas. His parents preceded him in death. He was also preceded in death by his wife, Linda, in September 2019. Bill is survived by his daughter Kerry L. Benson, her husband Brad of Frederick OK and their children Kate, Rachel and Rebecca Jo; his son Mark J. Mingle, his wife Melissa of Norman OK and their children Brooke and Ryan. He is also survived by his sister Nancy (Mingle) Robinson and her husband Gary of Independence, Missouri, their two daughters and families. He married Linda Louise George on June 14, 1964, at Altamont, Kansas. The couple established their first home in Wichita. Following his discharge from active military duty, Bill's work took them to Champaign, Illinois, The family moved to Bartlesville, Oklahoma, in 1973 where they resided for 35 years. Following Bill's retirement, they moved to Norman, Oklahoma in 2008, to be closer to family. He received his early education at a rural two room school in Labette City. Bill graduated from Labette County Community High School in Altamont, Kansas, in 1960. After attending Parsons Junior College his freshman year, he transferred to Wichita State University, graduating in 1965. At age 17, Bill was hired by KLKC, the radio station in Parsons, Kansas. It was the beginning of a broadcasting career that spanned nearly 30 years. He broadcast hundreds of sports events in Kansas, Illinois and Oklahoma, and even called a basketball game from Madison Square Garden at age 20. In 2017, he was inducted into the Bartlesville Sports Hall of Fame. In 1989, Bill began an association of nearly 18 years with Bartlesville's Jane Phillips Medical Center. He served in various capacities with JPMC rising to the position of Vice President. Shortly after moving to Norman, he began volunteering at Norman Regional Medical Center where he enjoyed the friendship of his fellow volunteers and many hospital staff members. Bill sought to live out his Christian faith as a follower of Christ by quietly seeking to set an example of character and love for his family. He was truly interested in the lives of those around him. He saw value in each person and would strive to honor people by memorizing their names and addressing them personally. For more than 35 years he regularly visited older men in their homes to offer his friendship and encouragement. Bill was quite proud to have served in the nation's military for 12 years, two years on active duty with the U.S. Air Force during the Vietnam war and 10 years in both the Army and Air National Guard. Bill wanted to be remembered as someone who showed up for work every day and did his best to provide for Linda and their children, and he did just that very well. A memorial service will be held at 2pm on Saturday, March 12, at Trinity Baptist Church, 801 N. Peters Avenue, Norman, OK. Cremation has already taken place. Friends and family are invited to contribute in Bill's memory to a hospital of their choice or to Bartlesville Community Foundation, 208 East 4th, Bartlesville OK 74003. Arrangements are under the direction of Carter Davis and the Davis Family Funeral Home – Dewey Chapel. Online condolences and remembrances may be shared at www.DavisFamilyFuneralHome.com.

The family of Bill J. Mingle created this Life Tributes page to make it easy to share your memories.

Send flowers to the Mingle family.