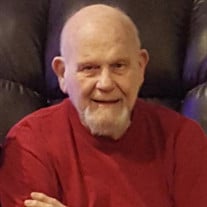 Bobby Al White, of Dewey, OK passed away in Bartlesville, on September 5,, 2021. Bobby, or Bob as he was known was born the son of Almon Chester White and Mildred Elaine Henderson White on April 8, 1939, in Tulsa, OK. He lived with his parents and older brother Billy in Shidler, OK where he attended and graduated high school in 1957. His love for God, cars and music began at an early age and he grew up tinkering on old cars, and playing trumpet in high school, college, jazz/dance bands and in later years at church. As a teenager, while working at the local grocery in Shidler, Bob found his trademark breakfast, of Hostess Chocolate Cupcakes (yes, they had to be Hostess) and a Pepsi. If you ever worked with Bob, you surely knew this because he has had these every-single day since. With his family he hauled grain, baled hay, cared for cattle and learned the importance of honest hard work. He went on to study at Southwestern State University in Weatherford, OK where he played football and most notably met the love of his life, Joy Gover. Bob graduated with his teaching degree and married Joy on August 10th, 1962. He accepted his first teaching position with Dewey Public Schools where they lived just a few blocks from their current home. Bob taught and coached for several years before he and Joy moved to Dexter, New Mexico from 1965 to 1972 where he coached, his track team taking a state title. Bob was then offered the Head Coaching position for football along with other sports in Dewey, so he moved his family home to Oklahoma. Over the course of his career, Bob taught Jr. High Science and Math, then went on to be the Jr. High Principal and eventually Senior High Principal where he gained the nick name, “Bulldogger Bob.” While raising his children, working cattle, teaching, coaching and School administration he managed to earn his master’s degree and finally retired after 39 years. If the school walls could talk, we’d hear countless stories of how Bob touched many lives, minds, and hearts with his kind and gentle yet firm character. His family remembers him teaching them to work on old cars, him taking them many camping and fishing and then of course the multiple trips to New Mexico and Arizona, but most importantly they remember him teaching them to love and worship our Heavenly Father. Bob faithfully guided by example, attending and serving at Bluestem Baptist as minister of music, and where he was ordained as a Deacon, then later at Bartlesville First Baptist where he served as deacon and played trumpet in the orchestra. For the past few years, he and Joy attended here at New Hope Indian Methodist Church. Bob was taught silversmithing by a dear friend while living in Dexter and became a true artisan specializing in turquoise jewelry. He alongside his soul mate, Joy, also a gifted artist of Native American beadwork, began showing and selling their art at many, many powwows and art shows across America. Their yearly trips west, were spent looking for the best pieces of turquoise for his creations. Bob never stopped seeing the beauty and potential in every rock he came across. A fond memory of Bob’s was meeting Jim Nabors, the comedian and actor also known as Gomer Pyle who visited Oklahoma Indian Summer in Bartlesville and took home a piece of Bob’s turquoise jewelry. Bob was proceeded in death by his parents, brother, and a grandson Austyn. He is survived by his beloved bride of 59 years, Joy White. His son Stephen White, with wife Lisa, and grandchildren Mikela and Gavin of Muskogee, OK, son Robie White wife Kay and granddaughter Madie of Muskogee, OK, and his daughter Debra Kay Mooney of Idabel, OK and a host of other family and friends. As an educator Bob leaves behind a legacy for generations of Bulldoggers families to come, as a husband was a provider and loved companion, as a father a great example of Fatherly love, compassion, and discipline and as a grandfather a gentle giant. Bob will be greatly missed here on earth, but we celebrate in knowing we will see him again with our God and Father, in heaven for eternity. In lieu of flowers memorials may be made to the New Hope United Methodist Church, PO Box 503, Dewey, OK 74029. Services will be held 11 a.m. on Saturday, October 2, at the New Hope United Methodist Church. Services are under the direction of Carter Davis and the Davis Family Funeral Home – Dewey Chapel. Online condolences and remembrances may be shared at www.DavisFamilyFuneralHome.com.

Bobby Al White, of Dewey, OK passed away in Bartlesville, on September 5,, 2021. Bobby, or Bob as he was known was born the son of Almon Chester White and Mildred Elaine Henderson White on April 8, 1939, in Tulsa, OK. He lived with his parents... View Obituary & Service Information

The family of Bobby Al White created this Life Tributes page to make it easy to share your memories.

Bobby Al White, of Dewey, OK passed away in Bartlesville, on...