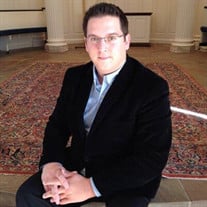 Brett Austin Terry, 31, formerly of Bartlesville, died Wednesday in Harrisburg, Pennsylvania. Brett will be missed by all who saw his light. Brett was born the son of Lee Terry and Susan Luella (Howarth) Brooks on June 6, 1987, in Bartlesville. He was homeschooled through 8th grade and developed a love for music at a young age. Brett attended Bartlesville High School and was active in the performing arts, excelling in music, drama and orchestra. The highlight of his senior year was when Brett was cast in the role of Jean Valjean in Les Misérables. Brett graduated with the Class of 2005, and had already become a sought-after organist. He played the organ for many churches including First Presbyterian and First United Methodist Church in Bartlesville. He was an accomplished recitalist, teacher, choir director, freelance musician and accompanist to many groups such as OK Mozart Festival’s Solisti New York Orchestra members, as well as music director-conductor for many musical theatre productions and house concerts. After his high school graduation, he furthered his education at University of Missouri (UMKC) Conservatory in Kansas City, graduating with degrees in both organ and vocal performance. He also served as president and vice-president of American Choral Directors Association, Kansas City chapter. Brett went onto graduate studies at Yale, earning a Masters degree in organ performance. He worked as a teaching assistant and organist for major university events and ceremonies. He also directed music for Yale Divinity School and Institute of Sacred Music’s daily chapel services, from constructing liturgies to managing budgets and bulletins. As a professional, he served as music director at Grace Episcopal in Kansas City, Missouri; Southminster Presbyterian Church in Prairie Village, Kansas; Scarsdale Congregational Church in Scarsdale, New York; and--most recently--Pine St. Presbyterian in Harrisburg, Pennsylvania. From 2013 to 2014, he was the interim director of chapel music at the Yale Divinity School and Institute of Sacred Music. He also served as director of the Central Pennsylvania Oratorical Society and dean of Harrisburg Chapter of the American Guild of Organists. Brett’s passion in life was music. He shared his God-given talents by giving concerts, working in the classical music community, and performing throughout the Northeast, in his home state of Oklahoma, as well as in Missouri and Kansas. He was committed to his craft, and worked tirelessly to perfect his skill. He was loved and admired by his colleagues, church family, and many who knew him. Brett is survived by his father Lee Terry and wife, Cyndi, of Harrah, OK; mother Susan Brooks and husband, Jim, of Bartlesville; paternal grandmother Delores Fadeley of Harrah; maternal grandmother Luella Howarth of Bartlesville; sisters Karalee Sitnik and husband, Geoffrey, of Austin, TX, and Summer Long and husband, Cody, of Canute, OK; and his nieces and nephews. He is preceded in death by his paternal grandfather Haskell Terry, maternal grandfather William Howarth, and brother Ryan Patrick Terry. Visitation will be held on Wednesday from 10-8 at the Davis Family Funeral Home – Walker Brown Chapel (918-333-7665), 4201 Nowata Road, Bartlesville, OK. Funeral services will be held 11 a.m. on Friday, March 8, at the Adams Blvd. Church of Christ, with Mr. Jody Burch officiating. Services are under the direction and care of Carter Davis and the Davis Family Funeral Home – Walker Brown Chapel. Online condolences and remembrances may be shared at www.DavisFamilyFuneralHome.com.

Brett Austin Terry, 31, formerly of Bartlesville, died Wednesday in Harrisburg, Pennsylvania. Brett will be missed by all who saw his light. Brett was born the son of Lee Terry and Susan Luella (Howarth) Brooks on June 6, 1987, in Bartlesville.... View Obituary & Service Information

The family of Brett Austin Terry created this Life Tributes page to make it easy to share your memories.

Send flowers to the Terry family.