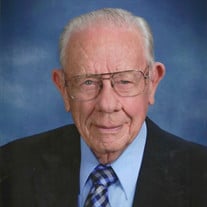 Bruce Peterson, 98, of Tulsa passed away early morning on Friday, April 23, 2021 in Tulsa, Oklahoma. Graveside services will be held Thursday, April 29th at 2:00 p.m. at the Memorial Park Cemetery in Bartlesville. Visitation will be held at the Davis Family Funeral Home & Crematory – Walker Brown Chapel at 12:30 – 1:30 p.m. the same day. Bruce Peterson was the second of three children born to Roy A. and Lelah Peterson at their rural home near Berthoud, CO. He received his elementary schooling at the nearby Lakeview Grade School and then continued his high school education at Loveland High School. After graduating from Loveland High School, he enrolled at Colorado A&M College in Fort Collins, CO. He served in the Army from 1945 until he was honorable discharge in 1946. After the war he returned to Colorado A&M and graduated in 1948 with a degree in mechanical engineering. He began his working career as a training engineer with Phillips Petroleum in Odessa, TX in July 1948. After completing his training, he was transferred to Borger, TX. He later transferred to a new job in Bartlesville, OK. After 37 years of service, he retired from Phillips Petroleum in 1985. He and Velma Lorraine Foiles were united in marriage on June 14, 1944. To them were born four children: Marilyn, David, Dennis, and Barbara. Bruce and Velma were involved in many youth activities; Boy and Girl Scouts, baseball, swimming and basketball. Bruce spent 45 years on the Property Committee at the First United Methodist Church and several years on the Water Resources Committee of Bartlesville. After retiring, Velma and Bruce spent many years traveling, golfing, gardening, and participating in many volunteer groups. He is survived by daughter Marilyn and husband Tom Logan of Golden, CO, son David Peterson and wife Linda of The Woodlands, TX, son Dennis Peterson and wife Peggy of Bixby, OK and daughter Barbara and husband Richard Blanchard of Tulsa, OK. Also surviving are 11 grandchildren and 21 great grandchildren.

Bruce Peterson, 98, of Tulsa passed away early morning on Friday, April 23, 2021 in Tulsa, Oklahoma. Graveside services will be held Thursday, April 29th at 2:00 p.m. at the Memorial Park Cemetery in Bartlesville. Visitation will be held at... View Obituary & Service Information

The family of Bruce Alfred Peterson created this Life Tributes page to make it easy to share your memories.

Bruce Peterson, 98, of Tulsa passed away early morning on Friday,...

Send flowers to the Peterson family.