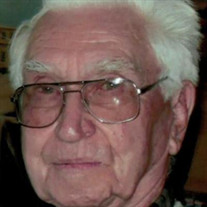 Bruton Bennett passed away Sunday, June 28, 2015. The family will be receiving friends from 6-8 p.m. Wednesday, July 1, 2015 at the funeral home. Services will be held at 10:00 a.m. Thursday, July 2, 2015 in the Walker-Brown Funeral Home Chapel with Dr. Dalton Young officiating. Military rites will be conducted by American Legion Post #105 Honor Guard. A graveside service will be held at 3:00 p.m. in the Sallisaw Cemetery, Sallisaw, OK with Pastor Dale Ritter officiating. Arrangements are under the direction of Walker-Brown Funeral Home. Bruton James Bennett was born July 20, 1921 in Jerusalem, AR to Walter and Sybil (Moore) Bennett. Bruton proudly served his country during WWII in the U.S. Army serving in New Guinea & Mindanao. After the war he continued his education and attended OSU for two years. He married Flora Lea Isham on January 28, 1947 in Fort Smith, AR. Bruton was proud of being an American farmer. He loved the farm life raising cotton as a youth, soybeans and winter wheat. He enjoyed working with his tractors, brush hoging and mowing. Bruton was an avid sports fan. His favorite teams were the OKC Thunder, Atlanta Braves and the Dallas Cowboys. Bruton is survived by his wife of 68 years, Flo, of the family home in Bartlesville and two grandchildren; Melissa and husband James Sweet of Ramona, Gwynne and husband Ryan Brock of Owasso. He was blessed with four great grandchildren: Aimee Lott and Rachel Trottingwolf of Bartlesville, Colton Brock and Madelyn Brock of Owasso, numerous relatives and many friends. Bruton was preceded in death by his parents, two brothers and daughter, Barbara Mathis. Casket Bearers will be: Sam Mathis, James Sweet, Colton Brock, Ryan Brock, Heath Abercrombie and Brock Abercrombie.

The family of Bruton Bennett created this Life Tributes page to make it easy to share your memories.

Send flowers to the Bennett family.