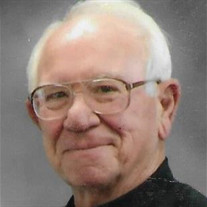 Burke K. Love, 76, of Bartlesville, died Thursday in Bartlesville. Burke was born the son of Elmer and Jewell (Emerson) Love on January 29, 1943, in Nowata, OK. He was raised in the area and enjoyed playing football with the Nowata High School Ironmen, graduating in 1961. Burke’s best friend growing up and in life was his brother Bruce - they did everything together. Burke went on to further his education at Eastern Oklahoma State College in Wilburton, OK, graduating with an associate’s degree in drafting. Burke decided to attend barber school in Oklahoma City and once completed, he made his way to Bartlesville and there he met the love of his life Etta at Ashley’s Salon where he was working. Burke had plans to move to Alaska the next day to take a promising position that offered adventure, but he felt compelled to stay and invest in a relationship with Etta Mae Myers. After just two months of courtship, their bond lasted a loving 50 years. Over the next 45 years Burke pursed barbering and put his drafting degree to good work. Together they built more that 75 houses - some they lived in and they moved many times over the years. Etta would oversee the day-to-day operations and decorate the homes when it was time to sell. Burke drafted the plans and spent many long days making sure everything was on track. Burke loved the Lord and was a member of the Dewey First Baptist Church for the past 14 years. Together Burke and Etta loved being together and taking spontaneous trips without plans or schedules. Most of all he loved doing for others especially for his children and grandchildren. He was a faithful husband and father for his family and will be dearly missed. Burke is survived by his loving wife Etta of the home; three children, Kristin Farris of Ochelata, Kim Thompson and John of Bartlesville, Daren Love and Dana of Bartlesville; four grandchildren, Toby Farris Jr., Chelsea Voss, Levi Farris, and Amber and Spencer Thompson; and four great grandchildren Daeson, Parker, Pyper and Lexi. He is preceded in death by his parents, brother Bruce Love, sister Nina Miller and son-in-law Toby Farris. In lieu of flowers, donations can be made: Dewey First Baptist Church, 300 East 10th Street, Dewey, OK 74029. Services will be held 10 a.m. on Tuesday, May 7, at the Dewey First Baptist Church, with Brother Mark Wright officiating. Services are under the direction of Carter Davis and the Davis Family Funeral Home – Walker Brown Chapel. Online condolences and remembrances may be shared at www.DavisFamilyFuneralHome.com.

Burke K. Love, 76, of Bartlesville, died Thursday in Bartlesville. Burke was born the son of Elmer and Jewell (Emerson) Love on January 29, 1943, in Nowata, OK. He was raised in the area and enjoyed playing football with the Nowata High School... View Obituary & Service Information

The family of Burke Kieffer Love created this Life Tributes page to make it easy to share your memories.

Send flowers to the Love family.