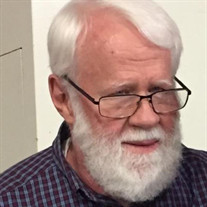 Carl Edward James, 70, of Dewey, Oklahoma, passed away unexpectedly on Sunday, April 19, 2020 at his home in Dewey. Carl was born July 21, 1949 at Mercy Hospital in Independence, Kansas, to Carl and Lucile Morrison James. He grew up in Wayside, Kansas, and the family moved to Dewey in August 1965. He attended school in Dewey his last two years of high school, graduating from Dewey High School in 1967. He attended Coffeyville Jr. College for one year and then graduated with his bachelor’s degree from Northeastern State University, Tahlequah in 1971. He majored in Art Education in college and was an accomplished watercolor artist. He did art shows for years in Kansas, Texas, Missouri and Oklahoma. Carl was instrumental in getting Sunfest started, where he had shown and sold his art for years. He enjoyed being Santa Claus to children at various places in Dewey and in the Christmas parade. He enjoyed planting flowers and some vegetables. Carl is survived by his twin brother, Earl and his wife Ann of Dewey; his sisters, Judy Schrader of Bartlesville and Carolyn Verge of Independence, Kansas; nephews and nieces and of course, his beloved cat, Blackie. Carl was preceded in death by his father and mother and brothers-in-law, Dick Schrader and Richard Verge, and niece, Marsha Verge. Carl was well-liked and will be missed by many. Visitation will be held on Thursday from 10-8. Funeral services will be held at 2 p.m. Friday, April 24 at the Harrisonville Cemetery in Independence, Kansas with Rev Dr. Rod MacIlvaine officiating. Services are under the direction of Carter Davis and the Davis Family Funeral Home – Dewey Chapel. Online condolences and remembrances may be shared at www.DavisFamilyFuneralHome.com.

Carl Edward James, 70, of Dewey, Oklahoma, passed away unexpectedly on Sunday, April 19, 2020 at his home in Dewey. Carl was born July 21, 1949 at Mercy Hospital in Independence, Kansas, to Carl and Lucile Morrison James. He grew up in Wayside,... View Obituary & Service Information

The family of Carl Edward James created this Life Tributes page to make it easy to share your memories.

Send flowers to the James family.