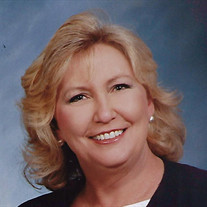 Carol Ann (Hendrix) Davis of Dewey passed away peacefully January 1, 2020 at the family home in Dewey. Carol was born August 17, 1947 in Stigler, Oklahoma to Roy and Virginia (Lefler) Hendrix. She was educated in Stigler and received her associate’s degree from Eastern State College in Wilburton where she was actively involved in journalism. She received her BA in English and Secondary Education at Northeastern State College in Tahlequah in 1969. She married Robert (Bob) Davis on August 9, 1969 in Stigler. She accepted a position at Rosedale Schools in Kansas City where she taught junior high and high school English and served as editor of the school publications. When Robert began attending the College of Veterinary Medicine at Oklahoma State University, she worked for the college in the Division of Public Information as 4-H Editor while attending graduate school and helped launch the OSU Veterinary College magazine. When Robert graduated, they moved to Ada where Robert accepted a position with Ada Veterinary Clinic. In 1981, the family chose Dewey to be their home and opened the Arrowhead Veterinary Clinic, which they owned until their retirement in 2012. Carol served as business and office manager for the Clinic. She was also active in the Veterinary Auxiliary while in Stillwater as well as in Dewey and was awarded the Lillian Grossman Outstanding Senior Wife award based on outstanding leadership and contributions to the auxiliary, the home and the community. In the early 1980’s Carol and Robert purchased the Dewey Herald where Carol served as Editor and Manager. Carol was an active member of the First Baptist Church of Dewey until her health condition made it impossible. Carol was passionate about her love for the City of Dewey and actively participated and organized fundraisers in many civic organizations including Dewey Civic Association, Friends of the Dewey Library, Dewey Library Board and Tom Mix Museum. Carol was a dedicated wife and mother and served as medical advocate for her family. She made friends everywhere and encouraged them to give back to their community and their church and enjoy their families. She was a gifted writer, loved having tea with her friends, following the lives and adventures of her nephews and nieces as well as planning her next project. Carol is survived by her husband of 50 years, Robert, of the home; sons, Jason of Dewey and Nathan of Bartlesville; sister, Mary (Kenneth) Fouts of Copan; and brother, Troy (Donna) Hendrix of Stigler; as well as brothers-in-law, Matt (Cathy) and Ben (Marsha) of Wilburton, Oklahoma; and sister-in-law, Jane Davis, also of Wilburton. She is preceded in death by her parents; her brother, Ralph Hendrix; and sister, Donna Colleen Whitekiller. Carol’s family will receive friends at the Davis Family Funeral Home – Dewey Chapel, 918-534-3030, 113 S. Osage (Hwy. 75), Dewey, on Monday, from 6-8 p.m. Visitation will also be held on Monday from 12-8 and Tuesday 9-12. As an expression of sympathy, memorial donations may be made to First Baptist Church of Dewey. A celebration of Carol’s life will be held at 2 p.m. on Tuesday, January 7, at First Baptist Church in Dewey with Rev. Mark Wright officiating. A private family interment will follow at the Dewey Cemetery. Services are under the direction of Carter Davis and the Davis Family Funeral Home – Dewey Chapel. Online condolences and remembrances may be shared at www.DavisFamilyFuneralHome.com.

Carol Ann (Hendrix) Davis of Dewey passed away peacefully January 1, 2020 at the family home in Dewey. Carol was born August 17, 1947 in Stigler, Oklahoma to Roy and Virginia (Lefler) Hendrix. She was educated in Stigler and received her associate&#8217;s... View Obituary & Service Information

The family of Carol Ann Davis created this Life Tributes page to make it easy to share your memories.

Send flowers to the Davis family.