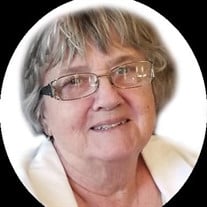 On Thursday, October 1, 2020, Carol Ann Fink of Dewey, Oklahoma, passed away at the age of 77 years. Carol was born on May 29, 1943, in McMinnville, Oregon, to Evan Lionel Errand and Myrtle Flo Stephenson. She became a resident of Dewey in 1967, and married Jerome Fink on December 31, 1968. While their six children were growing up, Carol was active in their varied interests: Cub Scouts, Girl Scouts, Sooner Saddler Club, and Dewey FFA. She is fondly remembered by many locals serving as a neighborhood mother to all with meals to share and a home where anyone was welcome in. In addition to her other community activities, Mrs. Fink was a longtime employee of the Dewey Dairy as a fry cook. She became a licensed practical nurse or LPN and worked as a scrub tech at Jane Phillips Memorial Hospital’s surgery center in 1989. She relocated with Dr. Baker exclusively for the final years of her career, before retiring in 2005. Mrs. Fink had a great love of family, and spent her retirement enjoying as much time as possible with her brothers and sisters, children, grandchildren, and great grandchildren. She enjoyed visiting the Pacific Northwest, and had a particular affection for her “Sisters Weekend” - time spent on the beach together with her sisters in Sisters, Oregon. Carol found beauty and joy in all of life, and always strove to live to the fullest, from tending to her beautiful flowers and wild birds to attending favorite annual events in Bartlesville and Dewey, or simply watching the sun rise over area lakes. She was also an animal advocate, and cared deeply for all of “God’s Beasties,” be they dogs and cats, horses, or wildlife in need. She is preceded in death by two sisters Paula Harris and Sherry Lee Errand; two nieces Penny Hudson and Terri Cox; and a nephew Jason Ringhouse. Carol leaves behind her husband of 52 years, Jerome Fink; three sisters Viola Monroe of Salem, Oregon, Marcia Bush of Ridgefield, Washington, and Donna Adams of Dallas, OR; two brothers Clint Errand of Auburn, WA, and Mike Errand of Sheridan, OR; daughters Joleen Reed and Jackie Stokes of Bartlesville, Jerri Bridwell of Dallas, Texas, and Jamie Smith of Mustang, OK; sons Rusty Fink of Dewey, and Rocky Fink of Vera, OK. Carol also leaves behind her granddaughters Shayla Sanders of Bartlesville, and Austin Smith of Mustang, OK; and grandsons, Bastian Remington, stationed in New Orleans, Louisiana, Keenan Schulz, stationed in Italy, Dylan Schulz of Yukon, OK, Zayne and Colin Smith of Mustang, OK, Tyler Fink of Wake Forest, North Carolina, Jordan Fink of Hockley, TX, Jared Fink of Oklahoma City, OK, Brandon Fink and Ryan Fink of Lafayette, LA, Justin Bridwell and Jay Ybarra of Dallas, TX; and her grand daughters-in-law Whitney Schulz and Taylor Schulz of Yukon and Mustang, OK, Vanessa Remington of New Orleans, LA, Katie Fink of Wake Forest, NC, Hunter Fink of Hockley, TX, and Emily Fink of Oklahoma City, OK. In addition to five great grandchildren and extended family, Carol has mothered and touched many friends, and innumerable other lives over the years. Carol continued her love of community, and sharing her famous homemade noodles, as a member of Oak Park Methodist Church. A Celebration of Life service will be held Friday, October 9, 2020 at 2 p.m. at this church. Arrangements are under the direction of Carter Davis and the Davis Family Funeral Home – Dewey Chapel. Online condolences and remembrances may be shared with Carol’s family and friends at www.DavisFamilyFuneralHome.com. Her sister Donna Adams was with Carol in the accident responsible for her loss of life, and the family would like to respectfully request any gifts of condolence to be made instead to Donna’s recovery fund for her extensive injuries and recovery process. You may make a memorial donation to the medical fund at https://www.gofundme.com/f/donna-errand-accident-recovery.

On Thursday, October 1, 2020, Carol Ann Fink of Dewey, Oklahoma, passed away at the age of 77 years. Carol was born on May 29, 1943, in McMinnville, Oregon, to Evan Lionel Errand and Myrtle Flo Stephenson. She became a resident of Dewey in 1967,... View Obituary & Service Information

The family of Carol Ann Fink created this Life Tributes page to make it easy to share your memories.

Send flowers to the Fink family.