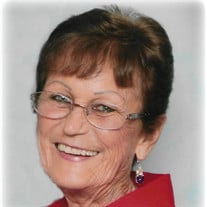 Myrtle “Carolyn” Robinson, 75, of Ochelata, died Friday, Feb. 1, 2019, in Ochelata. Carolyn as she was known, was born to Edward and Myrtle (Mosher) Deason in Moline, KS, on July 23, 1943. At a young age, her family relocated to Bartlesville where she attended area schools and graduated with the College High Class of ’61. She met the love of her life Samuel at a race. Sam served in the U.S. Army. After they wed on Nov. 3, 1961, Carolyn followed Sam wherever he was posted for the next 24 years, both stateside and overseas. They spent between one to three years at the following places: Vint Hill Farms Station in Warrenton, VA, then Turkey, next Italy, Fort Devens Army Base in Massachusetts, Two Rock Ranch Station in California, then Virginia. While Sam served his tour of duty in Vietnam, Carolyn and the boys moved back to Bartlesville. After a two-year stint in Okinawa, Japan, Carolyn and the kids returned to Bartlesville. In 1978, they moved to Ochelata where she loved working in her yard. She spent years building up the land to protect it from flooding and raised chickens and a family garden. Carolyn’s passions in life centered around Sam and her beloved family. While the kids were young, she stayed at home and always had breakfast ready for the boys. She worked at Phillips Petroleum Co. for a short time in the seventies. She also enjoyed getting out and staying active. She and Sam enjoyed fishing together and Carolyn always brought plenty of snacks along. She loved collecting antique jewelry and she often dragged Sam to auctions. Some finds she kept but others she resold at her booth at the Antique Depot in Skiatook. Carolyn could DIY anything – she and the boys even reroofed their house. She is survived by her three sons, Phillip Lee and Denise Robinson of Cabot, AR, Patrick Lloyd Robinson of Bartlesville, and Kevin Wayne and Lisa Robinson of Ponca City; sister Marilyn “Molly” E. and Joe Lucas of Bartlesville; five grandchildren, Shelby and DJ Glover of Cabot, AR, Samuel and Stephanie Robinson of Anchorage, AK, Kenny Robinson of Rush Springs, OK, Bradley Robinson, and Ashley Robinson, both of Ponca City; one great grandson William A. Robinson; and special niece Melanie Lucas of Bartlesville. She was preceded in death by her parents, husband Sam, and brother Fred E. Deason. Carolyn’s family will receive friends at the Davis Family Funeral Home – Walker Brown Chapel, 918-333-7665, 4201 Nowata Rd, Bartlesville, on Monday, Feb. 4, from 6-7 p.m. Visitation will also be held on Mon. from 10-8 and Tue. 9-1. Funeral services will be held 2 p.m. on Tuesday, Feb. 5, at the Davis Family Funeral Home – Walker Brown Chapel. Interment will follow in the Ochelata Cemetery. Services are under the direction of Carter Davis and the Davis Family Funeral Home – Walker Brown Chapel. Online condolences and remembrances may be shared at www.DavisFamilyFuneralHome.com.

The family of Carolyn Robinson created this Life Tributes page to make it easy to share your memories.