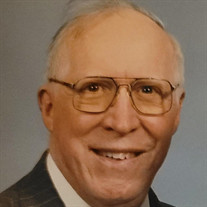 Charles William Adams, 95, of Tulsa, died Tuesday in Tulsa. He was an Army veteran and Phillips Petroleum engineer but will be best remembered as a father, grandfather, and great-grandfather and a devout man of God by those closest to him. Charles was born August 19, 1926, in Kusa, OK - a small community northeast of Henryetta in Okmulgee County. Charles served in the U.S. Army during the last stages of World War II, mostly in the South Pacific. It wasn’t until just recently that Charles shared his experiences during the service with his family. He was proud to have served alongside so many brave young men and women who fought for America and the world. Once honorably discharged, Charles attended Oklahoma A&M College or Oklahoma State University as we now know it. Charles pursued his degree in Mechanical Engineering and during this time he met Thelma. They married secretly in Caney, KS, because at the time nursing students weren’t allowed to be married. Once graduated they moved to Milwaukee, Wisconsin, and then to Bartlesville in 1953. Charles worked for many years at Phillips Petroleum Company, retiring at age 59 during the T. Boone Pickens attempted takeover. Thelma preceded him in death in 1985. Charles met Emmilou Collins Edmonds at First Baptist Church where they attended. They married in 1990 and subsequently relocated to Inverness Village in Tulsa. Emmilou preceded him in death in 2019. After a long and fulfilling career, Charles was content to stay at home and read. He read his Bible daily and loved the Lord. His passions were working and church. His co-workers and church family would testify to his dedication and character. Charles worked with the Boy Scouts and served as the Institutional Representative for Troop 11 sponsored by First Baptist Church during much of the 1970’s. Charles also completed BSA Wood Badge Training. Charles is survived by two sons, Michael Charles Adams and partner Warren, and Steven Lee Adams and wife Evelyn; three grandchildren, Joshua Steven Adams and partner Ramsey, David William Adams and wife Melissa, and Zaza Lorato; and two great-grandchildren Elizabeth and Olivia. He is preceded in death by his parents, two wives, and siblings. Visitation will be held on Monday, October 25, 2021, from 11-8, at the Davis Family Funeral Home & Crematory – Walker Brown Chapel. Graveside services will be held 1 p.m. on Tuesday, October 26, 2021, at the Floral Haven Cemetery. Services are under the direction of Carter Davis and the Davis Family Funeral Home & Crematory – Walker Brown Chapel. Online condolences and remembrances may be shared at www.DavisFamilyFuneralHome.com.

Charles William Adams, 95, of Tulsa, died Tuesday in Tulsa. He was an Army veteran and Phillips Petroleum engineer but will be best remembered as a father, grandfather, and great-grandfather and a devout man of God by those closest to him. Charles... View Obituary & Service Information

The family of Charles William Adams created this Life Tributes page to make it easy to share your memories.

Charles William Adams, 95, of Tulsa, died Tuesday in Tulsa. He...

Send flowers to the Adams family.