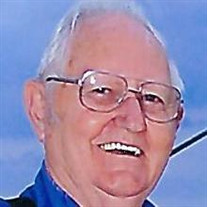 Charles Dean Lee, 89, longtime Dewey resident, died Tuesday in Dewey. Dean was born the youngest of nine children to Leslie Earl and Martha Caroline (Wheatley) Lee at home on June 10, 1930, in Dewey. He grew up on the family farm and lived his entire life on 4 Mile Road. During his school years Dean was active in FFA (Future Farmers of America) and graduated from Dewey High School in 1948. In 1950 he entered the U.S. Army and while stationed at Fort Dix, NJ, Dean met and quickly fell in love with Bobbie Blanchard. Dean and Bobbie married on January 12, 1952, and made their home back in Dewey, OK. Dean shipped out to Korea and Bobbie stayed home with her new mother-in-law. Once honorably discharged Dean worked as a mechanic before starting his new business Cooper and Lee Cattle Co. specializing in livestock hauling and custom farming. In 1983 he opened Lee’s Repair Shop next to his home on 4 Mile Road, finally retiring in 2007. After 45 years of loving marriage Bobbie preceded Dean in death in 1997. Dean was lucky to find a second great love with longtime friend Pat Payne Hicks. Dean and Pat united in marriage on May 30, 1999, and they enjoyed 20 years of loving marriage before she preceded him in death on October 28, 2019. In his younger years Dean spent time with his family, attending Micro Midget races and working as a mechanic on the pit crews. Every two years Dean and Bobbie loaded the kids and drove to New Jersey to visit with her family and her family came to Dewey on the opposite years. Dean loved spending time with his family and hosting get-togethers at the house. He attended his grandchildren’s many sporting events and was a big supporter of Copan School sports. Pat and Dean enjoyed taking trips to Branson, Missouri, and eating at their favorite restaurant, the Copan Truck Stop. He was truly loved and will be dearly missed. Survivors include two sons, Charles Dean Lee Jr. and Sue of Dewey, and Robert Earl Lee and Barbara of Dewey; one sister Ardith Rice; four grandchildren, Melissa Davis and Thresa, Carl Lee, Danny Lee and Dana, Kenny Lee and Amanda; five great grandchildren Taylor, Riley, Skyler, Tryston and Wyatt; and numerous nieces and nephews. He was preceded in death by his first wife Bobbie, second wife Pat, two brothers Ray Lee and Earl Lee, and five sisters, Lela Pearl Lee, Emma Anderson, Katherine Hanna, Rose Eccles, and Loraine Lee. Dean’s family will receive friends at the Davis Family Funeral Home – Dewey Chapel, 918-534-3030, 113 S. Osage (Hwy. 75), Dewey, on Friday, January 10, from 6-8 p.m. Visitation will also be held on Friday from 12-8 and Saturday 9-11. In lieu of flowers memorials may be made to The Journey Home, 900 NE Washington Blvd., Bartlesville, OK 74006. Funeral services will be held 2 p.m. on Saturday, January 11, at the Dewey Christian Church, with Pastor Dan Snider officiating. Interment will follow in the Dewey Cemetery. Services are under the direction of Carter Davis and the Davis Family Funeral Home – Dewey Chapel. Online condolences and remembrances may be shared at www.DavisFamilyFuneralHome.com.

Charles Dean Lee, 89, longtime Dewey resident, died Tuesday in Dewey. Dean was born the youngest of nine children to Leslie Earl and Martha Caroline (Wheatley) Lee at home on June 10, 1930, in Dewey. He grew up on the family farm and lived his... View Obituary & Service Information

The family of Charles Dean Lee created this Life Tributes page to make it easy to share your memories.

Send flowers to the Lee family.