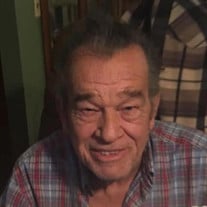 After a brief but courageous battle following major surgery, Charles Ray Reeves departed this earth on March 25, 2021. Dad was born in Pawhuska on December 18, 1946 to Grandma Kelsie and Grandpa D.V. (Shorty) Reeves. Dad was a longtime Barnsdall resident best known as the auto mechanic who could fix anything that ran on gasoline. He worked for many years at Taylor Motors and ran his own auto shop for several years with Mom’s help. Several times Dad worked in the oilfield between his stints as an auto mechanic where he enjoyed working outdoors every day and seeing his home state through the windshield. Dad’s last job was at Dick Conner Correctional Center in Osage County where he worked as a Corrections Officer and later worked in the facility’s auto maintenance shop. He was forced into an early retirement by health issues that continued to challenge him daily. Dad was a strong anchor for the entire family, living each day to support every person in his family as well as his friends. Throughout his life dad was an avid outdoorsman, fishing or hunting at every opportunity he could. He loved sharing his time teaching outdoor skills to each and every one he could, especially his children and grandchildren. Dad was the family’s master gardener and could grow anything. He gardened extensively and for many years he grew extra vegetables to sell at the roadside or at the farmer’s market. He also made sure that he taught his children how to grow their own food so they could better support their families. In 1983, Dad started pursuing his biggest legacy by purchasing a piece of land for a homeplace along Bird Creek. After living on the property for several years, he designed and built his own house with a helping hand from family and friends, finally finishing it in 1996. Dad’s house and property will continue to serve as center of our family events for decades and generations to follow. Dad is survived by his wife Nancy; siblings Tom, Chris and Walter; four children; Tony (Patricia), David (Julie), Janice (Robin) and Justin (Jamie); 10 grandchildren: Johnny (Miranda), Bobbi Jo, Luke (Bekah), Matthew, Drewe (Rae), Hunter (Breanna), Megan (Gensen), Albanie (Nick), Paige, and Blake; and four great grandchildren: Blayre, Jagger, Bennett and Hayden. He was preceded in death by his parents and brothers Leon, Butch, and Doug, sister Betty June, as well as granddaughter Lauren. He will be greatly missed by his family and a mountain of friends. Celebration of Life services will be held 10 a.m. on Friday, April 2, at the Avant House of Prayer in Avant, OK. Arrangements are under the direction of Carter Davis and the Davis Family Funeral Home & Crematory – Walker Brown Chapel. Online condolences and remembrances may be shared at www.DavisFamilyFuneralHome.com.

The family of Charles Ray Reeves created this Life Tributes page to make it easy to share your memories.

After a brief but courageous battle following major surgery,...

Send flowers to the Reeves family.