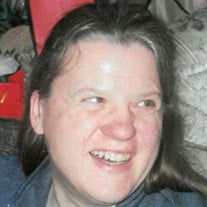 Cherrel “A”(Mason) Rodriguez was born December 17, 1961 at Bartlesville, Oklahoma to Earl D. “Sonny” Mason and LaVelma M. “Vel” Mason. She attended school in numerous states and in Spain as her father served 20 years in the United States Naval Aviation. The family returned to Bartlesville in 1975 when her father retired from the Navy. She graduated from Sooner High School in May of 1979. She was united in marriage on May 25, 1987 to Jose’ Luis Rodriguez at Olathe Kansas with a religious ceremony following at Oglesby Wesleyan Holiness Alliance on May 30, 1987. To this union two daughters were born. Josefa Adriana Rodriguez in 1989 and Breanna Marie Rodriguez in 1999. After their marriage she looked forward each year to visiting their family in Mexico at Christmas time. She loved her new in-laws and enjoyed being part of the large loving family. She was especially fond of her sisters in law and her mother in law. Cherrel was a homemaker for the 34 years of her marriage. She was a loving mother and wife and always strived to make everyone welcome in her home. She enjoyed being helpful and doing for others. She was a born again Christian and loved attending camp meetings and church services when she had the opportunity. When her special needs daughter, Breanna, was born she dedicated her time and energy to making life as happy as possible for her. She was an outstanding example of unselfish love and devotion as she became the 24/7 caretaker of Breanna. The recent joy of her life was the birth of her older daughter’s son Lincoln R. Bush two years ago. She would light up when grandson Lincoln was near and loved rocking him. She would sing and play with him every chance she got. She was preceded in death by her sister Cindy K Mason, Her Father and Mother in Law, Bartolo Rodriguez and Josefa Dominguez de Rodriguez, her Maternal Grandmother and Grandfather Henry and Mary Parker, Her Paternal Grandmother and Grandfather Earl and Mildred Mason, her sister in law Carmella Rodriguez and a number of Aunts, Uncles and Cousins. She is survived by her Husband Jose Luis Rodriguez of the home, her 2 daughters (Josefa) Adriana Rodriguez and Breanna M. Rodriguez. Her Grandson Lincoln R. Bush, Her Parents Earl (Sonny) and LaVelma “Vel” Mason. One Brother Vance D. Mason, several brothers and sisters in law, nieces, nephews and a host of Aunts, Uncles, Cousins and Friends. She will be deeply missed by her family and friends. Our loss is Heavens gain.

The family of Cherrel Rodriguez created this Life Tributes page to make it easy to share your memories.

Send flowers to the Rodriguez family.