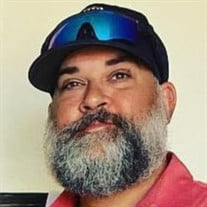 Clint Duane Williams, 40, of Bartlesville, died Tuesday, August 17, in Bartlesville. He worked hard, played hard, kept getting on base and now leaves a legacy of love that continues on in his boys and the many lives he touched. Clint was born the son of Lyle Duane and Anita Lynn (Johnson) Williams on December 9, 1980, in Tulsa. He was raised in Tulsa and from a young age developed a lifelong love for baseball. He played in beginning up through competitive ball with the American Legion and Connie Mack leagues playing Middle Infield. Clint excelled at his studies and graduated from Memorial High School in 1999. He went on to Northeastern State from which he graduated with a bachelor’s degree in 2005. While in Tahlequah, Clint met the soon-to-be love of his life Brandi McCarley at a party on Valentine’s Day 2001. Just a few short weeks later, Brandi asked him to escort her to a formal dance - their very first date. They tied the knot on May 29, 2004, and soon made their home in Bartlesville where they raised two sons with love and ball sense. Clint worked first at Hastings, a job that coincided with his love for movies and music, then Holly Frontier, and most recently with Magellan Midstream Partners in Tulsa. Clint’s passions in life centered around baseball and his boys - playing, coaching and mentoring the players on his teams. He made a point to “do things right” and that included inviting the opposing team to pray with them before every game. Together the family spent countless hours travelling for ball games and tournaments, road-tripping all over and taking special trips to Disneyland and Branson – win or lose, always creating lifelong memories they will cherish. Hands down, Clint’s favorite major league team (and 2020 World Series Champs) was the LA Dodgers. He was fortunate enough to attend a game at Cardinals Stadium when he was young with his father, a trip that made a lasting impression. OU Football was just as important: Clint was such a huge diehard fan, he traveled to Kansas City one cold Saturday (minus 11 degrees!) to watch his team destroy Missouri “Boomer Sooner!”. Most of all, Clint was a devoted husband, loving father and loyal friend, who loved the Lord and didn’t hide his faith. He modeled a God-given spirit of power and love in all of life’s ups and downs, and he will be dearly missed. Clint is survived by his loving wife of 17 years Brandi; sons Braden and Brody; parents Lyle and Anita Williams; maternal grandmother Edith Johnson; in-laws Miles and Kathy McCarley; sister Jessica Phillips and Eric, and Jessica’s daughters Avery and Kinley; and a league of family and friends. He is preceded in death by his paternal grandparents Donald and Barbara Williams, Maternal grandfather Merlyn Johnsons and Aunt Lisa Williams. In lieu of flowers memorials may be made to a scholarship fund for ball payers through PayPal to [email protected] or mail to Brandi Williams, c/o Davis Family Funeral Home & Crematory – Walker Brown Chapel, 4201 Nowata Rd, Bartlesville, OK 74006. A Celebration of Life will be held 10 a.m. on Saturday, at the Doenges Memorial Stadium, with a whiffle ball game to follow at the Don Tyler fields in Dewey. Everyone is invited to play and to please wear your baseball gear and/or Dodger Blue. Of course, OU is also acceptable. Services are under the direction of Carter Davis and the Davis Family Funeral Home & Crematory – Walker Brown Chapel. Online condolences and remembrances may be shared at www.DavisFamilyFuneralHome.com.

Clint Duane Williams, 40, of Bartlesville, died Tuesday, August 17, in Bartlesville. He worked hard, played hard, kept getting on base and now leaves a legacy of love that continues on in his boys and the many lives he touched. Clint was born... View Obituary & Service Information

The family of Clinton "Clint" Duane Williams created this Life Tributes page to make it easy to share your memories.

Send flowers to the Williams family.