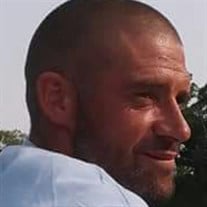 Cody Glen Bruce, 37, of Bartlesville, died Monday in Bartlesville. Although his time with us was too short his memory will live on in all those hearts that he touched. He is reunited with his dad but leaves behind many who loved him and will miss him dearly. Cody was born the son of David Glen and Jonna Lou (Mow) Bruce on February 15, 1982, in Ft. Worth, TX. Early on, Mammaw gave him the nickname Cody Bear and it still rings true to this day. In 1986, when Cody was just four, the family moved to Whippoorwill, OK, and he attended the nearby Bowring Schools through the eighth grade. He went on to complete his formal education in Pawhuska graduating with the Class of 2000. During this time, Cody worked at Braums to earn money to maintain the 1964 Chevy pickup his grandfather gave him, and he was proud of. In the summer of 2000, Cody helped his grandparents Johnnie and Louetta Mow relocate to Alaska for the summer. He worked at a salmon hatchery before returning to Oklahoma. Once home he ran a pulling unit (a specialized well-servicing rig) for Performance Petroleum and consistently worked in oil production. In 2014 he once again went out west to Coos Bay, Oregon, and farmed oysters until returning home in 2017. Once back he went to work with his brother and brother-in-law at SM Energy. Throughout his life, Cody was a hard worker with a sense of adventure and love for the great outdoors. He enjoyed hunting, fishing, and riding dirt bikes and four wheelers. He lived life full throttle and wasn’t afraid of getting his hands dirty or singing out loudly or helping a friend or stranger in need. He had a great sense of humor and you couldn’t help but smile when he was around. He was the life of the party and always looked forward to spending precious time with his nieces and nephews. Cody is survived by his mother Jonna Bruce of the home; girlfriend Angie Beaston; maternal grandmother Louetta Mow; brother Casey Wayne Bruce; two sisters, Tamara Bruce, and Kalah Radford and Justin; uncle Mark Mow; Aunt Freda Miller; and seven nieces and nephews. He was preceded in death by his father in 2001. A family gathering will be held 5 p.m. on Sunday, December 22, 2019, at the Bruce family home in Whippoorwill. Services are under the direction of Carter Davis and the Davis Family Funeral Home – Dewey Chapel. Online condolences and remembrances may be shared at www.DavisFamilyFuneralHome.com.

Cody Glen Bruce, 37, of Bartlesville, died Monday in Bartlesville. Although his time with us was too short his memory will live on in all those hearts that he touched. He is reunited with his dad but leaves behind many who loved him and will... View Obituary & Service Information

The family of Cody Glen Bruce created this Life Tributes page to make it easy to share your memories.

Send flowers to the Bruce family.