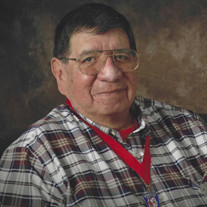 Curtis John Anderson, 74, longtime area resident, died Thursday in Bartlesville. Curtis was born the son of Joda Thomas and Juanita Pearl (Wells) Anderson on October 5, 1947, in Dewey, Oklahoma. He was raised and educated in Dewey. Curtis never felt compelled to obtain a driver’s license, and simply preferred to just ride his bicycle wherever he needed to go. Curtis was employed with Aztec for 30-plus years, working in facility maintenance at Phillips Petroleum Co. During this time he met the love of his life Eula Mae (Toot Toot) Martin. They united in marriage on August 17, 1993, and he didn’t just get a wife but her two children and many grandchildren and great grandchildren that followed, all of whom he deeply loved. His bonus family became the family of his heart and soul. Curtis loved to tell stories, usually out of the blue. Everyone around him would get a chuckle once he proclaimed at the end of his story that he was a genius. Curtis was proud of his Delaware heritage, and was a great great great grandson of Chief Anderson. A town in Anderson, Indiana was his ancestor’s namesake and Curtis was invited to attend its centennial celebration. Curtis and Tony made the journey and they thoroughly enjoyed their trip, the tour of the city as VIPs and all of the centennial festivities. Curtis even contributed to the time capsule that was placed to mark the historic event. It was a great experience he held dearly in his heart and he kept up with his Anderson friends. In his free time Curtis enjoyed playing on his computer, tracing his heritage back and looking for family photos. He had a special fondness for old black & white photos that captured a piece of the cherished past and conjured up precious memories of his family and friends. Locally he was involved with the Delaware tribe and served on various committees. He lived up to the mantra of “Walk Tall. Be Proud. You’re an INDIAN” and he was known as a friendly neighbor and all-round nice guy. For the past 11 years Curtis lived with Tony. Curtis certainly was loved and his sweet smile will be dearly missed. Curtis is survived by his children, Tony Campus and Melinda Marlene Campus; daughter in law Dee Maye; grandchildren, Tiffany (Brandon Poplin) Maye, Laci McClintock and Chase Campus; great grandchildren, Tangan, Maddox, Emery and Baker. He is preceded in death by his parents, beloved wife, and two brothers Joda Thomas Anderson and Jess Cloud Anderson. Visitation will be held on Thursday from 10-8 and Friday 9-12 at the Davis Family Funeral Home & Crematory – Walker Brown Chapel, 918-333-7665, 4201 Nowata Rd, Bartlesville. Graveside services will be held 2 p.m. on Friday, at the Delaware Indian Cemetery. Services are under the direction of Carter Davis and the Davis Family Funeral Home & Crematory – Walker Brown Chapel. Online condolences and remembrances may be shared at www.DavisFamilyFuneralHome.com.

The family of Curtis John Anderson created this Life Tributes page to make it easy to share your memories.

Send flowers to the Anderson family.