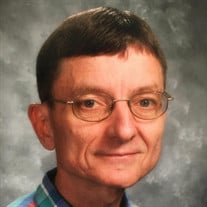 Curtiss Wright Meade, lifelong Bartlesville resident, was 63 when he departed this life on earth for eternal rest with his Heavenly Father. His deep love and kindness will be dearly missed by his son little Curtiss, siblings Connie, William, Gentry and Tyson, other family and friends. Curt was born the son of William Howard and Nora Nadine (Yellin) Meade on November 4, 1956, in Bartlesville. He grew up on Sand Creek in Osage County, working and playing rough with his three brothers and one sister. During his growing up years he developed his love for baseball and riding his motorcycle full throttle - just like his love for the Lord, growing up in the Methodist church. After graduating from College High in 1974, he went on to Wesleyan College to earn his bachelor’s degree and play college baseball. Curt went on to further his pastoral education in Disney, OK. In his early years Curt worked for Major Leasing, delivering vehicles across the United States. Curt felt his calling to full-time ministry and started a church in downtown Bartlesville called Children’s Church which ministered to children and youth through its bus ministry. Later he opened Grace Discipleship which focused on helping new Christians through their first year before settling into a bigger home church and Curt faithfully served the Lord through it for 25 years. Curt knew that our most precious commodity was time and how our creative minds spend or use time is an accurate gauge of our priorities – God was Curt’s priority throughout his life’s journey. Most recently Curt opened the Well Spring Clinic which focused on intense bible study and journaling to deepen faith and develop a wellspring of holiness. While actively pursing this ministry, Curt started delivering the Tulsa World, his route quickly grew with the addition of new routes and he had to hire other drivers to help him deliver all the papers on time, but he enjoyed helping his drivers and the subscribers by making sure their papers were placed correctly according to their needs. He was meticulous and conscientious, whether people were watching, or not. Life changed for Curt when he became a father and raised little Curtiss. He was very involved with Curtiss’s many activities such as soccer and school goings-on. Feeling strongly in the need for a Christian education, Curt was faithful to enroll him and Curtiss settled into Wesleyan Christian School which he attended until graduating in 2015. Curt was deservedly proud of the not-so-little man he had raised and he always had Curtiss’s back. Over the years Curt was called on to substitute teach at WCS when needed. If you asked the Wesleyan students, teachers and parents who recall him fondly, many would describe Curt as one of the kindest men they had ever known. Greater love has no one than this: to lay down one’s life for one’s friends. (John 15:13) – Curt embodied that with his life of ministry and service. Curt’s greatest passion was the Lord and he was always mindful of God’s will for his life. During his free time, he enjoyed watching baseball games, hanging out with his many friends at Mazzio’s, or keeping up with what Curtiss was doing. He loved cars and was always brand loyal. Subarus were his favorite and it wasn’t uncommon to see that Curt had traded one for another. He had the friendliest smile and a joyful spirit that embodied his love for God. Curt is survived by his beloved son Curtiss Ryan Meade of the home; siblings, Connie Jo McDonald of Bartlesville, William Bryon Meade and wife Bette of Broken Arrow, Gentry Lee Meade and wife Irene of Dallas, and Tyson Todd Meade of Oklahoma City. He is preceded in death by his parents. Curt’s family will receive friends at the Davis Family Funeral Home – Dewey Chapel, 918-534-3030, 113 S. Osage (Hwy. 75), Dewey, on Tuesday, from 6-8 p.m. Visitation will also be held on Tuesday from 10-8. In lieu of flowers memorials may be made to The Journey Home or to Compassus Hospice. Funeral services will be held 10 a.m. on Wednesday, at the Davis Family Funeral Home - Dewey Chapel, with Chaplin Roger Sheppard officiating. Interment will follow in the Ramona Cemetery. Services are under the direction of Carter Davis and the Davis Family Funeral Home – Dewey Chapel. Online condolences and remembrances may be shared at www.DavisFamilyFuneralHome.com.

Curtiss Wright Meade, lifelong Bartlesville resident, was 63 when he departed this life on earth for eternal rest with his Heavenly Father. His deep love and kindness will be dearly missed by his son little Curtiss, siblings Connie, William,... View Obituary & Service Information

The family of Curtiss Wright Meade created this Life Tributes page to make it easy to share your memories.

Send flowers to the Meade family.