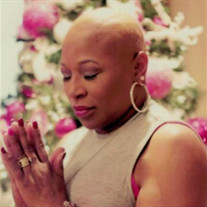 Dana (Nash) Thompson entered into eternal rest on Friday, November 11, 2016 surrounded by her loving family. Services will be held at 11:00 a.m. Saturday, November 19, 2016 at Oklahoma Wesleyan University Chapel Auditorium with Reverend Millard Jones officiating. Interment will follow in Memorial Park Cemetery. Arrangements are under the direction of Walker-Brown Funeral Home. A Reflection Service will be held at 7:00 p.m. Friday, November 18, 2016 at Miracle Temple Church of God in Christ, 1401 S.W. Adams Boulevard, Bartlesville, OK where Elder Lowell B. Nash is the pastor. Dana Arnett Nash was born June 2, 1964 in Bartlesville, OK to the union of Rudolph and Ruth (Adair) Nash. She married Marlanda "Jack" Thompson March 30, 1990 in Bartlesville and to this blessed union two children were added, Justin and Rudi. Dana received her Bachelor's degree from Oklahoma State University, Stillwater, OK and was a Customer Service Representative for ConocoPhillips for many years. Dana was gifted with a voice from heaven and sang throughout the city of Bartlesville, surrounding communities, states and overseas. Dana enjoyed cooking, fashion and being hospitable to everyone she met. She was a faithful and dedicated member at Miracle Temple, COGIC. Dana was a member of BEN (Black Employee Network at ConocoPhillips). She has received community awards such as “Volunteer-of-the-Year” in 2015 and Community Service Award of Excellence in 2016. Dana is survived by her husband, Jack Thompson of Bartlesville, son, Justin Thompson of Tulsa, and daughter, Rudi Thompson of Bartlesville. Dana is also survived by her mother, Ruth Nash of Bartlesville, three sisters; Drena Goree and husband Keith of Bartlesville, Ruda Nash of Dallas, TX, L. Christton Green and husband Daverick of Dallas, TX. Four brothers; Lowell Nash and wife Valarie of Bartlesville, Mitch Nash and wife Von of Belleville, IL, Mark Nash and wife Sonya of Sherman, TX, David Nash and wife Re of Katy, TX. Dana was blessed with numerous nieces, nephews, cousins and many friends. Dana was preceded in death by her father, Rudolph Nash.

The family of Dana (Nash) Thompson created this Life Tributes page to make it easy to share your memories.

Send flowers to the Thompson family.