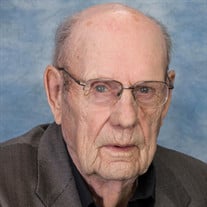 Daniel F. Thompson, 97, entered heaven on Wed., Feb. 16, 2022, at Ascension St. John Jane Phillips Hospital in Bartlesville, after a brief illness and just 12 days shy of his 98th birthday. He was born Feb. 28, 1924, in Hickory Flat, Mississippi, to Vardaman and Cassie (Hopper) Thompson. Later the family made their home in Arkansas. He was the second of 13 children. At age 17 he enlisted in the Army and fought in WWII, landing on Omaha Beach in France a few days after D-Day in June of 1944. He served his country with honor and was awarded a Purple Heart and a Silver Star. After his honorable discharge he made his home in Arkansas and worked as a sharecropper. There he met and married Lorene Adams on Feb. 5, 1946. To that union was born six children, two sons and four daughters, Kenneth, Mary Jane, Betty, Doris, Joyce, and Cleatus. Early in their marriage they moved to Michigan where Dan began his career at General Motors. Lorene preceded him in death on Feb. 14, 1972. Dan later married Frances (Kreider) Chapko and they were looking forward to celebrating their 50th wedding anniversary later this year. In 1979, Dan transferred to GM’s newly built Okla. City automotive plant. After retiring in 1984, they moved to Bartlesville, then Intercession City, FL, for a few years, before returning to Bartlesville where they lived the past 18+ years. Dan was a wonderful father, husband, and grandfather. He loved his children, faithful to call and visit with them frequently though miles kept them from seeing each other as often as he would have liked. He was a man of deep faith, loved the Lord and faithfully served Him all his life. He was a kind-hearted, loving man, always ready with a joke or a story to tell. For many years you could find him every day sitting on a park bench at Jo Allyn Lowe Park where he made many friends and visited with everyone passing by on their walk around the lake. He never met a stranger and will be greatly missed by family and friends. He is survived by his wife Fran; daughter Betty Smalley of Rives Junction, MI; and two sons Kenneth (Marianna) of Judsonia, AR, and Cleatus (Debbie) Thompson, Norman, OK. He is also survived by six stepchildren, Cheryl (Harold) Finkenbinder, Bartlesville; Debbie Thomas, Flint, MI; Alan (Julie) Sorenson, Owosso, MI; Lynn Sorenson Bankert, Flint; Larry Sorenson, Bartlesville; and Ed (Cindy) Chapko, Rogers, AR; two sisters, Nadine Gibson and Clardell Davis; 27 grandchildren, many great grandchildren, several great great grandchildren; and many nieces and nephews. He was preceded in death by his parents; first wife Lorene; three daughters Mary Jane Green, Doris Florinchi and Joyce Whitehead; as well as three grandsons Chad, Danny and Brian; seven sons-in-law; and several brothers and sisters. Dan’s family will receive friends at the Davis Family Funeral Home & Crematory – Walker Brown Chapel, 918-333-7665, 4201 Nowata Rd, Bartlesville, on Tue, from 6-8 p.m. Visitation will also be held on Tue from 10-8 and Wed 9-1. In lieu of flowers memorials may be made to the The Lighthouse Outreach Center, 1411 W Hensley Blvd., Bartlesville, OK 74003. Services will be held 2 p.m. on Wed, at the Davis Family Funeral Home & Crematory – Walker Brown Chapel. Interment will follow in the Memorial Park Cemetery. Services are under the direction of Carter Davis and the Davis Family Funeral Home & Crematory – Walker Brown Chapel. Online condolences and remembrances may be shared at www.DavisFamilyFuneralHome.com.

The family of Daniel Felon Thompson created this Life Tributes page to make it easy to share your memories.

Send flowers to the Thompson family.