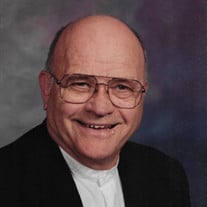 Daniel H. Willis, 87, formerly of Bartlesville, died Saturday in Eureka Springs, AR. Daniel, or Dan as he was known, was born the son of John Edward and Emma Matilda (Carlsgaard) Willis on Aug. 12, 1931, in Bald Hill, OK. At a young age the family moved to Okmulgee where Dan was raised and received his education, graduating from St. Anthony Catholic High School in 1948. Dan and Mary Louise Romine met through mutual friends and were united in marriage on Dec. 30, 1950, in Okmulgee. During his younger years Dan played basketball and even coached college ball at Oklahoma A&M in Okmulgee during the early 1950s. Dan started his career with Phillips Petroleum Company in 1950 in Okmulgee and his talents as a softball player soon caught the eye of the coach for the Bartlesville team and he was transferred to the Research Center in Bartlesville in 1957. He worked for the company as a research technician and was named as a developer on many patents held by Phillips Petroleum Co. After 37 years of faithful service he retired in 1986. In 2009 they moved to Eureka Springs to be closer to family and after 60 years of loving marriage Mary preceded him in death on March 1, 2010. In 2012 due to failing health he moved in with his daughter Deb and her loving care and support enabled him to remain at home. After retiring in 1986 Dan received a call to formal church ministry. He was ordained the Rev. Deacon Dan and joined the staff of St. John Before the Latin Gate Catholic Church in Bartlesville in 1991. Together, Dan and Mary led and conducted the RCIA (Rite of Christian Initiation of Adults) Catholic program and held Bible studies in their home. He worked in the various ministries of the church including visiting those home bound and, in the hospital, marriage prep and the many duties revolving around funerals including leading rosaries. He was active in the Knights of Columbus and was a Fourth Degree Knight. Dan’s passions in life revolved around family, church family and friends. When the kids were young, they enjoyed camping. Later in life they traveled all over the United States. On one special occasion while on a decadent retreat to the Vatican they meet Saint Pope John Paul II and were blessed by his touch. Playing golf was one of his favorite activities especially playing with Father John Cunningham, a dear friend. Dan was handy and tackled most any home projects. He refereed many basketball games at local schools and bartended special events held at Woolaroc Museum and Wildlife Preserve. Most of all Dan loved the Lord and serving Him. Dan is survived by five children, Deborah Pickens and Ted of Eureka Springs, AR, Paul Willis and Susan of Fresno, CA, Sam Willis and Kathy of Chattanooga, TN, Angela Garcia and Domingo of Plano, TX and Diana Navis and Michael of Neenah, WI, one sister Beatrice Kunkler of Osaka, ID, sixteen grandchildren, nineteen great grandchildren and one great great grandchild. He is preceded in death by his parents, wife, son Steven Daniel Willis, four brothers, Herb, Bill, John and Dick and four sisters, Margie, Betty, Patricia and Erin. Visitation will be held Thursday from 9am to 4pm at the Davis Family Funeral Home – Walker Brown Chapel, 918-333-7665, 4201 Nowata Rd, Bartlesville. A rosary will be said on Thursday at 5pm, at St. John Before the Latin Gate Catholic Church. Funeral mass will be held Friday at 10am at St. John Before the Latin Gate Catholic Church. Interment will follow in the Memorial Park Cemetery. Services are under the direction of Carter Davis and the Davis Family Funeral Home. Online condolences and remembrances may be shared at www.DavisFamilyFuneralHome.com.

Daniel H. Willis, 87, formerly of Bartlesville, died Saturday in Eureka Springs, AR. Daniel, or Dan as he was known, was born the son of John Edward and Emma Matilda (Carlsgaard) Willis on Aug. 12, 1931, in Bald Hill, OK. At a young age the... View Obituary & Service Information

The family of Daniel H Willis created this Life Tributes page to make it easy to share your memories.

Send flowers to the Willis family.