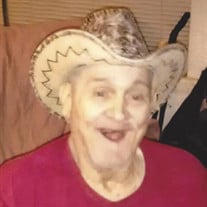 David Delton King, 75, long-time Bartlesville resident passed from this life on Friday, November 1, 2019. He was born in Dewey, OK, on September 28, 1944, one of eight children born to Delton F. and Francis (David) King. Growing up with seven brothers and sisters was great fun for David, who oftentimes was ornery to his siblings, especially his sisters. One evening while at a dance hosted at the Copan Roundup Club David met a friend of his younger sister and she not only caught his eye but his heart. Her name was Phyllis Lyle and they quickly fell in love. The lovebirds were united in marriage on June 7, 1968, and they went on to enjoy 51 loving years of marriage together. David’s favorite job was washing exterior windows on the Phillips buildings downtown. He loved the work and the many friends he met along the way. In his younger years David enjoyed bowling in local leagues and attending dances with Phyllis even though he didn’t really enjoy dancing. (That’s how much he loved her and loved spending time with her!) In later years, they enjoyed watching movies and old TV shows. Country Western music was what he liked to listen to. David was a practical joker and loved to laugh - he will be dearly missed. David is survived by his loving wife of the home Phyllis; two sisters, Carmel Holeman and her husband Dave of Bartlesville, Delma Rhett and her husband Denny of Ramona; two brothers, John King of Ochelata, and Howard King and his wife Jan of Cleveland; as well as several nieces and nephews. He was preceded in death by his parents, his sisters Clara Jane Cooper and Ida Mae Munkirs and her brother Burt King. No formal services are planned. Arrangements are under the direction of Carter Davis and the Davis Family Funeral Home. Online condolences and remembrances may be shared at www.DavisFamilyFuneralHome.com.

David Delton King, 75, long-time Bartlesville resident passed from this life on Friday, November 1, 2019. He was born in Dewey, OK, on September 28, 1944, one of eight children born to Delton F. and Francis (David) King. Growing up with seven... View Obituary & Service Information

The family of David Delton King created this Life Tributes page to make it easy to share your memories.

Send flowers to the King family.