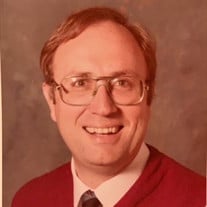 David Eric Stepp, 74, of Bartlesville, formerly of Mesquite, Texas, died Friday in Bartlesville. He was a lifelong teacher, child of God, and devoted son, husband, father and grandfather. David was born the son of John B and Pearl Therese (Riveland) Stepp on February 10, 1947, in Greenville, SC. His father an ordained pastor and missionary took the family to the mission field in Sao Paulo, Brazil, for several years before settling in Mesquite. David graduated from Mesquite High School in 1965 and furthered his education at Baylor University completing his bachelor’s degree in three years. While home on break he met the love of his life Emily Gail Mabry at the First Baptist Church of Mesquite where his father pastored. They united in marriage on June 1, 1968, with Dr. John B Stepp officiating, and made their home in Waco, Texas, where David completed his master’s degree at Baylor. While in Waco, they were blessed with two beautiful children, Emily and Eric. David also began his teaching career during this time. The family moved back to Mesquite when a position opened up at his former alma mater where David taught senior English for the next 27 years, retiring in 2000. Retirement was not for David and he joined Bishop Lynch Catholic High School for the next 13 years, teaching a total of 45 years. David and Gail moved to Bartlesville in 2019 to be closer to their daughter and family. David’s passions in life were simple. He was a Son of the American Revolution, a descendent of early patriots, promoting understanding of the American Independence journey. An avid reader, David finished a book every single day. He loved music and kept up with his favorite artists from all eras and genres but especially the American folk music trio Peter, Paul and Mary, attending five of their live concerts. David also enjoyed playing the harmonica and Spanish guitar. Time spent with Gail at home was precious, and they enjoyed talking about everything together. David was baptized at age five, and he loved and served the Lord as Sunday School teacher for adults and children. Teaching was his calling and his profession, and David also made time to serve as a cub scout leader, coaching life skills and building character. Former students often kept in touch with David long after and they would reach out to their former teacher to share achievements and to thank him for his dedication to them during their school days. David loved and was loved, and he will be dearly missed by all those lives he touched. David is survived by his loving wife Gail of the home; mother Pearl Stepp; daughter Emily Claire Nelson (David); three sisters Kathryn Gail Tinius (Don), Rebecca Jo Stepp and Rachel Elizabeth Stepp; three grandchildren, Xavier David Nelson, Angela Alexandra Nelson and Lizet Yojana Nelson; and two nephews Austin John-Paul Tinius and Adam Ralston Tinius. He is preceded in death by his father and son Christopher Eric Stepp. Graveside services will be held at the Restland Memorial Park Cemetery, Dallas, TX with Pastor Jim Burt officiating. Services are under the direction of Carter Davis and the Davis Family Funeral Home & Crematory – Walker Brown Chapel. Online condolences and remembrances may be shared at www.DavisFamilyFuneralHome.com.

David Eric Stepp, 74, of Bartlesville, formerly of Mesquite, Texas, died Friday in Bartlesville. He was a lifelong teacher, child of God, and devoted son, husband, father and grandfather. David was born the son of John B and Pearl Therese (Riveland)... View Obituary & Service Information

The family of David Eric Stepp created this Life Tributes page to make it easy to share your memories.

Send flowers to the Stepp family.