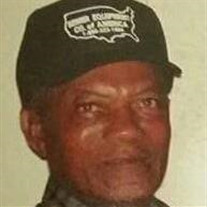 Carl Ishem of Bartlesville, age 78, passed away Saturday, December 19, 2015 at 7:30 p.m. Services will be held at 1:00 p.m. Monday, December 28, 2015 in the Walker-Brown Funeral Home Chapel with Reverend Walter Pettiford officiating. Interment will be in White Rose Cemetery. Arrangements are under the direction of Walker-Brown Funeral Home. Davis Carl Ishem was born July 1, 1937 in Cushing, OK to George W. and Jeurl (Ellis) Ishem. He was united with Mount Olive Baptist at a very young age. He began his education in Cushing. The family later moved to Bartlesville, where he completed his education at Douglass School. He was a member of the Douglass basketball team and is often remembered for his great basketball skills. Carl married Viola Shoate, and they continued to reside in Bartlesville with their daughter, Cynthia. Carl worked for Phillips Petroleum Co. and retired in 1999 after 42 years of dedicated service. After retiring he continued to do special projects such as remodeling, landscaping and especially his favorite past time, hunting, until his health began to fail. He was a devoted husband and a loving father and grandfather. Carl is survived by his wife, Viola of the home and daughter, Cynthia (Ishem) Barnes of Oklahoma City. He was blessed with three grandchildren: Whitney Burgess of Edmond, Trey Burgess Tulsa and Taylor Burgess Edmond along with two great grandchildren: Mekhi and Isaiah. Carl is also survived by his brother, Eugene Ishem of Wichita, KS, sister, Carolyn Birch of Bartlesville, aunt, Viola Fletcher of Bartlesville, uncle, Hughes Ellis of Aurora, CO, numerous nieces, nephews, family members and many friends. Carl was preceded in death by his parents and four brothers: twins Harold & Harry Ishem, Robert Ishem and George W. Ishem Jr. The family express their thanks for all of your prayers and a special thanks to Debra Crumpton, Fred Gragg, Bartlesville Health & Rehab Community and Comforting Hands Hospice for the special care that they gave Mr. Ishem during his illness.

The family of Davis "Carl" Ishem created this Life Tributes page to make it easy to share your memories.

Send flowers to the Ishem family.