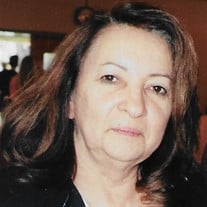 Deanna Darlene Brownell, 76, of Owasso, passed Wednesday, August 21, 2019 in Owasso. Deanna was born the daughter of Donald and Emma Lou (Scullawl) Elam on June 8, 1943, in Ochelata, OK. From a young age growing up in Ochelata she developed a love for animals especially horses. Deanna played basketball throughout her school years and received her O for Ochelata letter in Basketball during her 1960 school year. She furthered her education at Draughon Business School in Tulsa until moving to Kansas City to work at Phillips Credit Union. During this time, she met and fell in love with Harold Brownell and they united in marriage in her mother’s living room on October 31, 1970. Although they divorced in 1985 Deanna and Harold remain the best of friends. In 1982 she started her 21-year career with the U.S. Postal Service working the late-night shift at the downtown post office in Tulsa. Deanna had many hobbies which included taking care of her house plants, reading, watching movies and doing crafts. She crocheted and knitted, and she made baby blankets and outfits for her many grandchildren and was working on one for little ones on the way. One of her specialties were the newborn baby caps she knitted that were given to local hospitals as gifts for newborn babies going home for the first time. Deanna spent countless hours working jigsaw puzzles and crossword puzzles, and even though she didn’t see all of her grandbabies as often as she wanted, she loved each and every one of them dearly. Deanna is survived by her mother Emma Lou Gray of Ochelata; three children, Dean Riley of Broken Arrow, Dana Riley of Tulsa, and Donald Riley of Tulsa; two sisters Sharyl Elam of Bartlesville, and Sandra Howland of Vera; seven grandchildren: Shannon Paige Riley, Logan Wayne Riley and Paige, Victoria Lee Jones and Eric, Johnathon Burkett, Nicole Renee Riley, Ashley Riley and Donald Riley Jr.; and 15 great grandchildren. Visitation will be held on Sunday, August 25, from 12-5 p.m. at the Davis Family Funeral Home – Walker Brown Chapel, 918-333-7665, 4201 Nowata Rd, Bartlesville. Funeral services will be held 2 p.m. on Monday, August 26, 2019, at the Davis Family Funeral Home – Walker Brown Chapel. Interment will follow in the Matoaka Cemetery in her hometown, Ochelata. Services are under the direction of Carter Davis and the Davis Family Funeral Home – Walker Brown Chapel. Online condolences and remembrances may be shared at www.DavisFamilyFuneralHome.com.

Deanna Darlene Brownell, 76, of Owasso, passed Wednesday, August 21, 2019 in Owasso. Deanna was born the daughter of Donald and Emma Lou (Scullawl) Elam on June 8, 1943, in Ochelata, OK. From a young age growing up in Ochelata she developed... View Obituary & Service Information

The family of Deanna Darlene Brownell created this Life Tributes page to make it easy to share your memories.

Send flowers to the Brownell family.