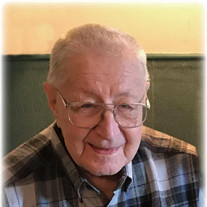 Dee Ware “Buster” Burton, 89, longtime Bartlesville resident, died Sunday in Coffeyville, Kansas. While his loved ones will miss him dearly, he has departed this earth for the arms of his Holy Father and Eternal Savior. Dee, or Buster as he was known, was born the son of Paul Franklin and Ruby May (Ware) Burton on February 21, 1931, in Osage County, Oklahoma. He was an only child and dearly loved by his parents. Growing up on Sand Creek was fun and exciting, he also earned the nickname Speedy when he converted his bicycle into a motorcycle. One evening while on a blind date Buster met the love of his life Esther Newport. They fell head over heels in love and true to his Speedy moniker, they quickly married, making their home in Bartlesville for most of their 69 years except for a few years down the road in Nowata. Buster was an electrician by trade and could fix anything, whether around the house or on the job. The last 20 plus years of his career he worked at Washington County Memorial Hospital in downtown Bartlesville until he retired in1992. Buster was always busy and whether he was cleaning, organizing or working in the yard, he simply liked to stay active. Buster was a busy bee and enjoying buzzing about his work. Throughout his life, he lived and labored to the glory of God. When his mother was in her last years Buster and Esther were faithful to care for her and visit her at mealtimes when she needed full-time care in the nursing home. Together Buster and Esther enjoyed working jigsaw puzzles, camping at Grand Lake, and attending their home church the Wesleyan Holiness Alliance. Buster is survived by his loving wife Esther of the home; two children Phillip Burton and wife Lisa of Bartlesville, and Ruby Baugus and husband Garland of Bartlesville; daughter in law Jamie Burton of Bartlesville; and nine grandchildren including Jeremy Lee Burton who has been a special help to Esther these past few years; and seven great grandchildren. Buster is preceded in death by his parents and two beloved sons Jerry Burton and Dee Wayne Burton. Visitation will be held on Thursday from 12-8, at the Davis Family Funeral Home and Crematory - Walker Brown Chapel, 918-333-7665, 4201 Nowata Rd, Bartlesville, OK. Funeral services will be held 10 a.m. on Friday, at the Davis Family Funeral Home and Crematory – Walker Brown Chapel, with Rev. Don Hazelwood officiating. Interment will follow in the Pawhuska Cemetery. Services are under the direction of Carter Davis and the Davis Family Funeral Home and Crematory – Walker Brown Chapel. Online condolences and remembrances may be shared at www.DavisFamilyFuneralHome.com.

Dee Ware &#8220;Buster&#8221; Burton, 89, longtime Bartlesville resident, died Sunday in Coffeyville, Kansas. While his loved ones will miss him dearly, he has departed this earth for the arms of his Holy Father and Eternal Savior. Dee, or... View Obituary & Service Information

The family of Dee Ware Burton created this Life Tributes page to make it easy to share your memories.

Send flowers to the Burton family.