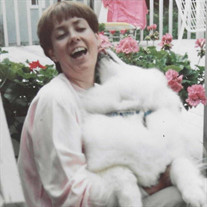 Deirdre Bartlett McArdle Lewis, 67, of Bartlesville, passed away on Friday, February 25, 2022, in Bartlesville. Deirdre was born on April 2nd, 1953, in Connecticut at Yale Newhaven Hospital. She was the daughter of John and Alma McArdle. She was raised in Madison, CT, a small tourist town on the North shore of the Long Island Sound. Her education would start there at The Williams School, a private school for girls, all the way through high school. After attending New College in Sarasota, FL and studying abroad in France, she then went on to receive her B.A. from the University of Connecticut and then an M.A. in Art History from the University of Massachusetts at Amherst. Aside from her astounding education, she was also a published co-author of a book written with her mother, Alma DeCoen McArdle. The book, entitled “Carpenter Gothic,” was a study of the history and style of the gothic architectural movement. In the business world, Deirdre put bid packages together for a high-rise construction company for several years before joining the world-famous Shubert Theater staff in New Haven, CT. There, she wrote grants during the day and managed the theater shows at night. Working with famous people was common, and it would be her connections that brought Vince Gill to Bartlesville in 1997 for the Centennial Celebration. Deirdre had moved to town a year earlier, after a fluke meeting and marrying a local guy. A job with architect Scott Ambler, who saw what she could do resulted in her becoming the coordinator for the entire year-long event. Together with co-chairman Tom Sears and Bill Creel along with hundreds of volunteers, they would celebrate the 100-year anniversary of Bartlesville’s beginning. From presidents to movie stars, the town was full of them. After the Centennial, Deirdre would take a job with the Nature Conservancy again writing grants. The late Fredrick Drummond, one of the founders of the Tallgrass Prairie Preserve, and Deirdre, would become great friends while gathering thousands of dollars in grants and donations to preserve a piece of local history. When a job with Elder Care of Bartlesville came up, it would turn into what she considered one of her finest accomplishments, next to having her daughter. Financial grants along with donations went up tremendously and a little fundraising party called The Good, The Bad and The Barbeque that Dan and JoAnn Gallery had started in an effort to raise funds for Elder Care would become an event people from the four-state area for years would flock to. From that organizations like the YMCA would get her advice for their own fundraiser which would be called the YMCA Rocks Woolaroc. Woolaroc also would get her advice and start up Frank Phillip’s party called the Cow Thieves and Outlaws Reunion. It had been dormant for over 20 years and most locals had never heard about it and nowadays they call it the best party in the state, raising thousands of dollars. A person who enjoyed what she did, the limelight meant nothing to her. Instead, she stayed more in the background. The biggest example would be two Bestselling books and a weekly column, that ran not only in the Examiner-Enterprise but several other area papers. For 20 years, the front man in these stories would be called the Original Buffalo Dale and his coast to coast, border to border stories would be put together by Deirdre. With her death, this obituary will be not only Deirdre’s but also the death of the Original Buffalo Dale. We hope you’ve enjoyed the ride. A come and go reception in her honor will be held at Elder Care on March 15th from 5-7 pm. Her family and friends hope to see you there.

Deirdre Bartlett McArdle Lewis, 67, of Bartlesville, passed away on Friday, February 25, 2022, in Bartlesville. Deirdre was born on April 2nd, 1953, in Connecticut at Yale Newhaven Hospital. She was the daughter of John and Alma McArdle. She... View Obituary & Service Information

The family of Deirdre Bartlett McArdle created this Life Tributes page to make it easy to share your memories.

Send flowers to the McArdle family.