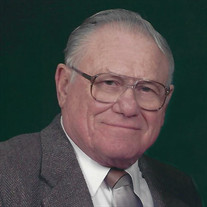 Delbert Earl Dayhoff, longtime Bartlesville resident, died Saturday in Bartlesville. At 93, he was a Navy veteran, beloved husband, father, grandfather, and great grandfather and an eternal child of God. Delbert was born the son of Harry and Phoebe (Hoover) Dayhoff on September 6, 1927, in Detroit, Kansas. He was raised in and around Abilene, Kansas. Growing up, Delbert enjoyed being part of a large family – eventually he became the last surviving sibling and was preceded by his brother and four sisters. Delbert enlisted in the U.S. Navy before graduating high school and served at the end of WWII from 1945-1946. Upon his honorable discharge he finished up his education, graduating from Bison High School in 1946. A little later in life while selling Rena Ware cookware, Delbert meet the soon-to-be love of his life Janelle Dayhoff at the Unique Café in Bethany. Although it took a long time for Janelle to realize he was the one, Delbert was determined and eventually convinced her to say yes to a date. His perseverance paid off, changing his life forever. Delbert and Janelle were united in marriage on June 30, 1961, at the Pennsylvania Church of the Nazarene in OKC and they enjoyed 59 years of loving marriage. Their first home was in Oklahoma City where Delbert started his career with Montgomery Wards in the appliance department. They were transferred to Ponca City for the next 10 years before transferring again to the Bartlesville store where he worked until his retirement when the store closed. Other jobs Delbert had and enjoyed over the years included his time working for Witworth Drilling Co. in Russell, Kansas. For several years after his retirement from Montgomery Ward, he drove Bartlesville public school buses, befriending the students and staying on the go. Delbert’s passions in life centered around family and friends. When the boys were younger, the family would pack up, go camping and enjoy getting away from everyday life. Later in life Janelle and Delbert traveled more extensively and they enjoyed traveling to Hawaii, California plus other smaller trips closer to home. They drove to as many of Gary’s college baseball games as they could. Delbert was proud of the men his boys became and he loved the grandchildren and great grand child they blessed him with. Delbert was handy and he tried to fix everything, especially his cars, from changing the oil to engine overhauls, oftentimes making his own parts along the way. Later in life, he took up jogging and porch sitting as his favorite pastimes. Delbert and Janelle enjoyed their church family and are longtime members of the First Church of the Nazarene since 1976. Delbert is survived by his loving wife Janelle; four sons, Larry Dayhoff and Diane of DeBique, CO, Randy Dayhoff and Carol of Mesa, AZ, Brad Dayhoff and DeeAnne of Bartlesville, Gary Dayhoff and Jessica, daughter Sophie of Laranger, LA; four grandchildren, Amber San Miguel and Chance, Dalton Dayhoff, Dylan Dayhoff, and Sophie Dayhoff; one great grandson Casen Joe San Miguel; and one great granddaughter on the way Everly Louise San Miguel. He is preceded in death by his parents, one brother Dale Dayhoff and four sisters, Opal Holzer, Thelma Bailey, Lucille Cummins and Laverna Westfall. He is also survived by numerous nieces and nephews. Services will be held Thursday, October 8, at 2 p.m. at Bartlesville Church of the Nazarene. Services are under the direction of Carter Davis and the Davis Family Funeral Home & Crematory – Walker Brown Chapel. Online condolences and remembrances may be shared at www.DavisFamilyFuneralHome.com

Delbert Earl Dayhoff, longtime Bartlesville resident, died Saturday in Bartlesville. At 93, he was a Navy veteran, beloved husband, father, grandfather, and great grandfather and an eternal child of God. Delbert was born the son of Harry and... View Obituary & Service Information

The family of Delbert Earl Dayhoff created this Life Tributes page to make it easy to share your memories.

Send flowers to the Dayhoff family.