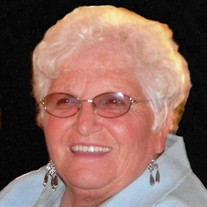 Delores Ann Drews Dean, 87, of Wann, Okla., died on Monday, April 25, 2022, at home with her husband and children at her side. Delores and her twin sister, Doris, were born on August 30, 1934, in Coffeyville, Kan., to Herman Carl Drews and Elizabeth Pugh Drews. Doris passed away shortly after birth and Delores always said she felt part of her was missing because of her twin. Delores grew up on a farm in South Coffeyville, Okla., with her two brothers and four sisters, milking cows, working fields, canning, gardening and baking. This is where her cooking skills were first formed. She attended Lenapah High School from first to twelfth grade and graduated in 1952. She excelled in home economics, played basketball and was involved in her church. After graduation Delores started her career in department store management, starting in Coffeyville, Kan., for 5 cents an hour. She earned $10 to $15 dollars a week, and Delores told her family this was considered good wages at the time. Delores attended the Methodist Church in South Coffeyville, Okla., for years. Recently she attended the church in Wann, Okla. She was unable to attend church after having Covid, so she faithfully watched church on TV and declared her love for the Lord. She believed she would see Jesus and be reunited with her twin at long last. Delores believed in giving and helping everyone and was always for the underdog. Delores met her lifetime love at Coffeyville, Kan., at the memorial hall dance. Donald said he circled the hall several time to get the opportunity to meet the woman he thought was “the most beautiful woman he had ever seen.” That was when that love affair began and they were married on October 23, 1954 in South Coffeyville. This year, the loving couple would have celebrated their 68th anniversary. They started this lasting love affair as Donald went to Korea in 1950. When he returned, he asked Delores if “she could iron his shirts to suit him.” That was his way of proposing. Delores had many names: Lores, mommy, mother, mom, Dee, and Grandma Dean, but she cherished the name Grandma the best. She adored those grandkids. Delores never met a person who didn’t like her, and many were in wonder over her kindness, her generosity, and her great meals. Her family said their mother’s holidays were magical with all the decorations and food, the gifts, and the smells of the holidays. Her thanksgivings and Christmas were forever memorable to anyone who got that experience. All her children and grandchildren, each and every one, were treated so special that they felt the event was made just for them. Delores owned Dee’s Place for 10 years, loving that time, meeting people, decorating and antiquing. Delores had a green thumb. She had gardens fit for a king’s castle and grew trees from seedlings that stand tall today. She could snap a start off a plant and produce an amazing garden. We all had plenty of harvest. Delores had a pet deer named Bubble’s that would follow her around in her garden. Some would think she was mother nature herself. Delores is survived by her loving husband, Don Dean of Wann, Okla.; four children, Linda Hendricks of Wann, Okla., Donna Howerton and husband Spike of Lenapah, Okla., Nancy Petty and husband Don of Oologah, Okla., and Mike Dean and wife Sandra of Wann, Okla.; eight grandchildren; 23 great-grandchildren; brothers, Dewayne Drews of Grove, Okla., Norman Drews of South Coffeyville, Okla.; and sister, Lamona Davis of South Coffeyville, Okla. She was preceded in death by her father, Herman Carl Drews; mother, Elisabeth Margaret Pugh Drews; sisters, Doris Drews, Anita Compston, and Pat Hill. “Mother will be forever missed, forever admired, forever loved. With all our love, we were always so proud of you.” ~ Her children: Linda, Donna, Nancy and Mike. Memorial services will be held at 2 p.m. Thursday, April 28, 2022, at the Davis Family Funeral Home & Crematory – Walker Brown Chapel, with Pastor Greg Buie officiating. Honorary Pallbearers are Bronc Hendricks, Chase Smith, Thomas Petty, Amanda Dobbs, Justin Petty, Kaylee Howerton, Mike Dean, and Rae Dean. Services are under the direction of Carter Davis and the Davis Family Funeral Home & Crematory – Walker Brown Chapel. Online condolences and remembrances may be shared at www.DavisFamilyFuneralHome.com.

Delores Ann Drews Dean, 87, of Wann, Okla., died on Monday, April 25, 2022, at home with her husband and children at her side. Delores and her twin sister, Doris, were born on August 30, 1934, in Coffeyville, Kan., to Herman Carl Drews and... View Obituary & Service Information

The family of Delores Ann Dean created this Life Tributes page to make it easy to share your memories.