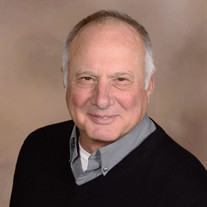 Dennis E. Haberstroh, Air Force veteran and Bartlesville resident, was 71 when he died Thursday, February 24, 2022, in Bartlesville, OK. He was a wonderful husband, father, grandfather, brother, neighbor and friend of friends, and he will be deeply missed. Dennis served a Risen Savior, and he lives on in heaven and in the hearts of family and friends on earth. Dennis was born the son of Ray Jr. and Mary Catherine (Garrett) Haberstroh on December 14, 1950, in Kansas City, MO. He was raised on the family farm and became the fourth generation to farm the original Homestead Act Farm which dates back to the 1860s. After graduating from Stanley High School in 1968, Dennis went to Pittsburg State College, then enlisted in the U.S. Air Force. He married his high school sweetheart Elaine Curteman on May 22, 1971. His first assignment was Biloxi, MS, and six months later, he was sent to West Berlin, Germany, during the Vietnam War. Elaine was by his side during each of his assignments. Once honorably discharged, they returned to the family farm where they raised cattle and hay. Dennis started his lifelong career with the U.S. Postal Service and faithfully served 38 years. In 2011 they moved to Table Rock Lake, Shell Knob, MO, before moving to Bartlesville, OK, in 2018 to be nearer family. When he was asked what his hobbies were, Dennis said, “Working.” He wasn’t kidding -there was nothing the amazing man couldn’t do or teach himself to do. He was an electrician and a builder who built their home on the farm. He liked repairing anything he could get his hands on, including his recent project of rebuilding and painting a 1950 International Farmall tractor. He would do anything for friends and family. He was a role model to his kids and anyone who witnessed his can-do drive and gentle spirit. Together with Elaine, Dennis enjoyed spending time with his children and grandchildren, playing golf with his family and friends, and traveling near and far. In recent years he has been passionate about attending his grandchildren’s many activities and being present in their lives. His daughter-in-law Amanda shared: “I’ve got a guy” whenever something needed to be done, that was Dennis. And Dennis was always ready to fill that role. He loved the Lord and was a faithful member of Bartlesville First Church, and his quiet kindness and compassion for others shone a light wherever he went. Dennis is survived by his best friend and loving wife of 50 years, Elaine (Nana Laney); three children Tara Ann (Russell) Lawrence, Ret. Lt. Col. Douglas Edward (Laura) Haberstroh, and Kurt Garrett (Amanda) Haberstroh; two brothers Ray Haberstroh and Scott (Lynn) Haberstroh; and seven grandchildren, Jackson, Joshua, Dathan, Parker, Kora, Kylie and Korbin. He is preceded in death by his parents and sister-in-law Barbara Haberstroh. In lieu of flowers memorials may be made in Dennis’s memory to Bartlesville First Church, 4715 Price Road, Bartlesville, OK 74006. Dennis’s family will receive friends on Friday March 4, 2022 at Bartlesville First Church, 4715 Price Road, Bartlesville. A reception will be held at 1:15 p.m. Services will be held at 2 p.m with Rev. Greg Tener officiating. Services are under the direction of Carter Davis and the Davis Family Funeral Home & Crematory – Walker Brown Chapel. Online condolences and remembrances may be shared at www.DavisFamilyFuneralHome.com.

Dennis E. Haberstroh, Air Force veteran and Bartlesville resident, was 71 when he died Thursday, February 24, 2022, in Bartlesville, OK. He was a wonderful husband, father, grandfather, brother, neighbor and friend of friends, and he will be... View Obituary & Service Information

The family of Dennis E. Haberstroh created this Life Tributes page to make it easy to share your memories.

Send flowers to the Haberstroh family.