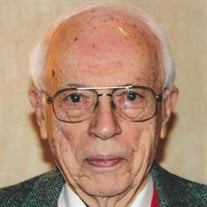 Dick Sayles Hall died February 3, one month shy of his 100th birthday, in Bartlesville, Oklahoma. He was a resident of Bartlesville for most of the last 75 years. A native of the state of Nebraska, Mr. Hall was born in 1921 in Grant at the... View Obituary & Service Information

The family of Dick Sayles Hall created this Life Tributes page to make it easy to share your memories.

Send flowers to the Hall family.