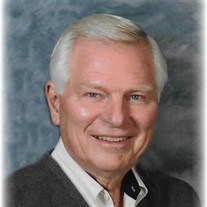 Donald L. Cone, 82, passed away on Sunday, Aug. 23, 2020, at Ascension St. John Medical Center in Tulsa, Okla. Donald L. Cone was born July 12, 1938, in Enid, Okla. Don graduated from Enid High School in 1956 and from Oklahoma State University in 1961. Don began his career with Phillips Petroleum Company in 1961, and after 38 years retired in 1999 from the Legal Division as Corporate Assistant Secretary of the Company. Don and Carol Ann Dehner were married on March 10, 1962, in Enid. They established their home in Bartlesville, joined the Bartlesville First Baptist Church and raised their three children, Todd, Lee Anne and Scott in Bartlesville. Don volunteered for several organizations. Some of his early volunteer activities included the Jaycees and Kiwanis Club. He also volunteered in the Little League baseball program, serving as President of the Federal Little League and later as President of the Bartlesville Little League programs. He was active in the Downtown Kiwanis Club, served on that club’s Board of Directors, served as President of the club, and also as the Kiwanis Lieutenant Governor for the district. He regularly volunteered at the Frank Phillips Historic Home mansion and at Woolaroc. Don is survived by a son Todd Cone and his wife Elizabeth; a daughter Lee Anne (Cone) DeLapp and her husband Curtis; and a son Scott Cone. Don leaves eight grandchildren -- Henry, Emma, John, Mary and Elise Cone; along with Tanner and his wife Clarissa DeLapp, Chandler DeLapp and Anna Kate DeLapp. Visitation will be from 9 a.m.-8 p.m. on Friday, Aug. 28, with the family to receive friends from 6-8 p.m. at the Davis Family Funeral Home & Crematory - Walker Brown Chapel, 918-333-7665, 4201 Nowata Road, Bartlesville, OK 74006. Burial will be at the White Rose Mausoleum under the direction of Carter Davis and the Davis Family Funeral Home. The memorial service is planned for 11:30 a.m. Saturday, Aug. 29, at Bartlesville First Baptist Church. In lieu of flowers, Don and his family have requested donations be given to the Bartlesville Community Foundation and designated for the Carol Ann and Don Cone Legacy Scholarship Fund. Contributions may be made online at bartlesvillecf.org. This fund has been established to assist students who are pursuing a career in education.

The family of Donald Lee Cone created this Life Tributes page to make it easy to share your memories.

Send flowers to the Cone family.