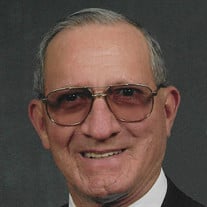 Donald Ray Davidson, 82, of Bartlesville, passed away on Tuesday in Bartlesville. Don was born the son of Cecil L. and Eva Lee (Brown) Davidson on January 29, 1937, in Mannford, OK. He was raised in Hominy, graduating from Blackburn High School in 1955. His family farmed and their cash crop was sweet potatoes. They also raised various livestock and Don helped with their care. Later in life, he remembered fondly that during his teen years the home was wired for electricity. Don joined the U.S. Army and served two years active and four years in the reserves just before the start of the Vietnam Conflict. Once honorably discharged he entered business school in Tulsa. During his career he worked in asset recovery and enjoyed the challenges of his work. Don met Jean by chance when he entered the glass store where she worked. They struck up a conversation and went for coffee at a local café. From there a relationship formed, love blossomed, and they were united in marriage on December 27, 2001, making their home in Bartlesville. Don loved to fish and one of his favorite places was Skiatook Lake, a beautiful scenic lake close to home. Just eight years ago Jean rescued an eight-month-old puppy Duke. At first Don wasn’t too fond of Duke chewing up his garden hoses, but they soon became best friends. Together Don and Jean loved to travel and they shared many memorable trips to Ruidoso, New Mexico, where the lakes are turquoise blue and the summer horse racing was a highlight of their trips. They also traveled all over the United States and enjoyed learning the history of the various locales they visited. Don loved his family and he especially enjoyed spending time with his grandchildren and having great fun at family cookouts. He loved the Lord and was a faithful member of St. Luke’s Episcopal Church. Don is survived by his loving wife of 18 years, Mary Jean of the home; two children, Jill Johnson and Joe, and Genny Hasty and Chuck; two sisters, Sybil Lovett and Donna Wood; five grandchildren, Sheree Vaughn and Kyle, Kristi Rowland and Matt, Jessica Hasty, Mitch Hasty, and Nick Johnson and Shania; and five great-grandchildren, Trinton Vaughn, Aiden Rowland, David Rowland, Emma Rowland and Carter Rowland. Don is preceded in death by his parents; one brother Clayton Davidson and daughter Joan Long. Visitation will be held on from noon to 5 p.m. Sunday, November 17, at the Davis Family Funeral Home – Walker Brown Chapel, 918-333-7665, 4201 Nowata Rd, Bartlesville.. Funeral services will be held 10 a.m. on Monday, November 18, at St Luke’s Episcopal Church, with Father Stephen D. Hood officiating. Interment will follow in the Memorial Park Cemetery. Services are under the direction of Carter Davis and the Davis Family Funeral Home – Walker Brown Chapel. Online condolences and remembrances may be shared at www.DavisFamilyFuneralHome.com.

Donald Ray Davidson, 82, of Bartlesville, passed away on Tuesday in Bartlesville. Don was born the son of Cecil L. and Eva Lee (Brown) Davidson on January 29, 1937, in Mannford, OK. He was raised in Hominy, graduating from Blackburn High School... View Obituary & Service Information

The family of Donald Davidson created this Life Tributes page to make it easy to share your memories.

Donald Ray Davidson, 82, of Bartlesville, passed away on Tuesday...

Send flowers to the Davidson family.