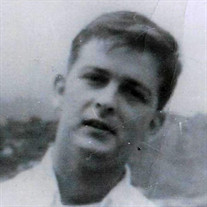 Donald Arthur George, Sr. ascended to his heavenly kingdom on Sunday, November 8, 2020, at the age of 79. He was a U.S. veteran who served his country with honor, courage and commitment. After living and racing across several states, waters and climates, Don became a longtime resident of Oklahoma where he cherished life with his wife Jayne, children, grandchildren and great grandchildren, family and friends. Don was born in Norfolk, Virginia, on February 25, 1941, and was adopted by his loving parents Harold Slone and Marie Ina (Ward) George. After receiving his GED, Don enlisted in the United States Navy where he served during the Vietnam War as 2nd Class Machinist Mate from 1959 to 1963. While on leave Don married the love of his life, Pearlie Jayne Barnes, on November 15, 1962, in Hooker, OK. Don then returned to his military duty on the USS Epperson and Jayne would follow shortly after to make their first home together in Hawaii in 1963. Don and Jayne would later move to Colorado where they ran a resort in the Green Mountain Falls area for one year. They enjoyed traveling together and with their children. One of the family’s favorite trips was to Kampgrounds of America’s Royal Gorge when they hiked up to Pike’s Peak. The family would later move to Liberal, KS, before making their forever home in Ramona, OK, in 1972. Don worked as an independent electrician for most of his life and he enjoyed spending time tinkering around on projects with his grandchildren and great-grandchildren. He was particularly proud of a solar powered electric flagpole that he recently received a patent for. One of his most cherished items Don had ever owned was his souped up ’58 Chevy that he loved to race and would proudly proclaim that he never lost a race. Donald is preceded in death by his parents and daughter Elizabeth Broadway. He is survived by his loving wife Pearlie Jayne George of the home; son Donald Arthur George, Jr.; four daughters Stephanie Dee-Ann Smith, Tracy Lynn George, Shannon Schultz, and Darlene Doskoch; seven grandchildren James Kahler, Michelle Davis, Evan Smith, Kevin George, Whitney George, Linsay George, and Rebecca McDonald; nine great-grandchildren; and many other family members and friends. Donald's family will receive friends at the Davis Family Funeral Home - Dewey Chapel, 918-534-3030, 113 S. Osage (Hwy. 75), Dewey, on Thursday, November 12, from 6-8 p.m. Visitation will also be held on Thursday from noon to 8 p.m. and Friday from 10 a.m. to noon. Funeral services will be held at 2 p.m. Friday, November 13, at the First Baptist Church of Ramona with Pastor Lynn Nikkel officiating. Interment will follow in the Ramona Cemetery. Services are under the direction of Carter Davis and the Davis Family Funeral Home - Dewey Chapel. Online condolences and remembrances may be shared at www.DavisFamilyFuneralHome.com.

Donald Arthur George, Sr. ascended to his heavenly kingdom on Sunday, November 8, 2020, at the age of 79. He was a U.S. veteran who served his country with honor, courage and commitment. After living and racing across several states, waters... View Obituary & Service Information

The family of Donald George created this Life Tributes page to make it easy to share your memories.

Donald Arthur George, Sr. ascended to his heavenly kingdom on...

Send flowers to the George family.