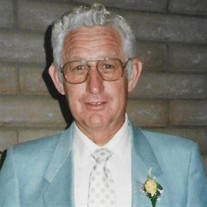 Donald Wayne Montgomery, 86, of Bartlesville, died Friday in Bartlesville. He was a loving husband, father, grandfather and friend who will be missed dearly. The oldest of three children, Wayne, as he was known, was born on December 23, 1933, to Roy Jasper and Jossie Mabel (Gibson) Montgomery, near Brownfield, Texas. While he was still young, the family moved to East Grand Plains, New Mexico, later ventured out to California and settled in Wasco, a small town in the San Joaquin Valley. Graduating from Wasco High School in June 1952, Wayne started his career with Pacific Gas and Electric Company on the Monday a following his high school graduation. First working out of the Bakersfield Service Center, he was later transferred to Fresno where he joined Bethel Southern Baptist Church and was active in the Young Adult Department. One Sunday, from the choir loft, he noticed a young lady walking into the church sanctuary. Sixty years later, he remembered she was wearing a hat decorated with little blue flowers. One thing led to another and shortly after, Wayne and that young lady, Shirley Jean Follett, were united in marriage on January 7, 1956, making their home in Bakersfield, California. Soon after, Wayne was drafted into the U.S. Army with basic training at Fort Ord, Monterey, California and was stationed in Germany for 18 months. Returning from Germany, Wayne was honorably discharged at Fort Hamilton in Brooklyn, New York. Shirley flew to New York to meet Wayne and together they drove back to California over a three week period, seeing the natural wonders along the way. They reestablished their home in Bakersfield until 1961. From 1961-2005, they made their home in Lemoore, California, raising their two boys and making memories. In 1965, Wayne was ordained Deacon in the Lemoore First Southern Baptist Church. In 1989, Wayne retired from PG&E, during which time, his job classifications had varied – groundman, apprentice lineman, and electrical troubleman. Possibly, the highlight of these 37 years, happened on July 21, 1952, six weeks after his hire date, when a 7.3 earthquake-the strongest earthquake since the 1906 San Francisco quake-hit the southern part of the San Joaquin Valley. As a new employee, working through-out that chaos, indeed left a long-standing impression. Before retirement, Wayne became a California State Electrical Contractor opening his business, King’s Electrical Service. He was active in this business for 10 years. During this period, his company often did pro-bono work on several churches. His interest in building and grounds began early in life; as a high school student he drew the architectural plans for construction of the new Wasco Missionary Baptist Church building; of which he and his mother were members. In 2005, he and Shirley sold their home and became fulltime RVers, seeing the country- passing through almost every state. At some point in their travels, they came through Bartlesville, a positive experience that stuck with them. Three years later, in 2008, they returned to Bartlesville to live. Soon, they became active members of the First Baptist Church. He enjoyed staying active and keeping busy. He was blessed by God with two exceptionally skilled hands - he remodeled his homes and enjoyed creative crafts such as macramé knotting, stained glass work, and in recent years wood carving. Enjoying traveling throughout the United States, to celebrate their 60th anniversary, a memorable Alaskan cruise was made. Wayne is survived by his loving wife of 64 years, Shirley; two children, Jeffrey Dean Montgomery and wife, Janice of Lemoore, California, and Roger Lee Montgomery and partner, Yves Fore, of Miami, Florida; six grandchildren, Stephen Carl Montgomery, Ashley Nichole Rocha, Tamara Lynn Montgomery-Ward, Hannah Ruth Montgomery, Timothy James Montgomery and Daniel Jeremiah Montgomery five great-grandchildren, Miley, Zoe, Eli, Israel, and Emmett, as well as one sister Glenda Greenlee of McKinney, Texas. He was preceded in death by his parents, infant son, Michael Wayne Montgomery, and brother, Doyle Montgomery. Services will be held 2 p.m. on Thursday, at the Davis Family Funeral Home – Walker Brown Chapel, with Rev. Tom Cox officiating. Services are under the direction of Carter Davis and the Davis Family Funeral Home – Walker Brown Chapel. Online condolences and remembrances may be shared at www.DavisFamilyFuneralHome.com.

Donald Wayne Montgomery, 86, of Bartlesville, died Friday in Bartlesville. He was a loving husband, father, grandfather and friend who will be missed dearly. The oldest of three children, Wayne, as he was known, was born on December 23, 1933,... View Obituary & Service Information

The family of Donald Wayne Montgomery created this Life Tributes page to make it easy to share your memories.

Send flowers to the Montgomery family.