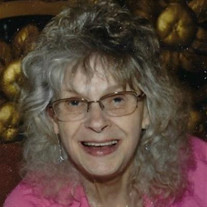 Donna Emery, 71, of Dewey, was in Tulsa Friday when she departed this earth for eternal life with her Heavenly Father. Donna was deeply loved and her lively spirit will be missed by her family and friends. Donna was born the daughter of Ronnie Keller and Geneva (Hynek) Staley on April 25, 1948, in Neodesha, KS. She was born at home and her mother turned a drawer into a bassinet for her to sleep in. Donna hated being an only child and wished for many brothers and sisters to play with. Once the family moved to Dewey where her father operated R&K Salvage, Donna soon found a sister in lifelong friend Marge Barcus. Throughout life, they made sure to get together every chance they could and dearly loved one another. Donna attended Dewey Schools with the Class of 1967. Shortly after her schooling Donna united in marriage with Jim Schulte, and they had two boys David and Jimmy. She loved children, especially babies and toddlers, and she worked many years in childcare. Sometime in 1979 Donna met Dennis Emery through mutual friends. They quickly fell in love and united in marriage on May 3, 1980, at New Hope Indian United Methodist Church in Dewey. Donna and Dennis made their home in Dewey and enjoyed 40 years of loving marriage. The pair loved doing everything together, and the only two times they were apart from each other was while Dennis went with his buddies on fishing trips to Canada. The couple enjoyed several cruises to the Bahamas and Donna’s favorite part of each cruise was the fancy food, bingo and entertainment. Most of all she loved the Lord. They joined the First Baptist Church of Dewey shortly after they were married, and she had to overcome her fear of water just long enough to be baptized. Donna was a little feisty but always loving and she will be dearly missed. Donna is survived by her loving husband Dennis of the home; three children, La Deana Emery and husband Buddy Andrews, David Schulte and wife Tammy, and Jimmy Schulte; three grandchildren, Bryton Andrews, Jagger Andrews and Dillon Schulte; one great grandson; and sister Marge Barcus. Donna is preceded in death by her parents, one son Amos Vern Emery, and Aunt Pauline Barnes. Visitation for Donna will be held Tuesday from 10-8 p.m. and Wednesday from 9-noon at Davis Family Funeral Home - Dewey Chapel, 918-534-3030, 113 S Osage, Dewey, OK. Services will be held Wednesday at 1 p.m. at First Baptist Church in Dewey with Brother Mark Wright officiating. Services are under the direction of Carter Davis and the Davis Family Funeral Home – Dewey Chapel. Online condolences and remembrances may be shared at www.DavisFamilyFuneralHome.com.

Donna Emery, 71, of Dewey, was in Tulsa Friday when she departed this earth for eternal life with her Heavenly Father. Donna was deeply loved and her lively spirit will be missed by her family and friends. Donna was born the daughter of Ronnie... View Obituary & Service Information

The family of Donna Jean Emery created this Life Tributes page to make it easy to share your memories.

Donna Emery, 71, of Dewey, was in Tulsa Friday when she departed...

Send flowers to the Emery family.