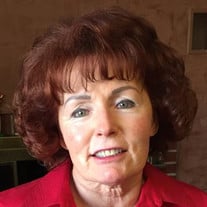 Donna June Gibson, 69, of Bartlesville, Oklahoma passed away surrounded by loved ones Tuesday February 26, 2019. Donna was born the daughter of Ebert and Cliffogene (Masoner) Patterson on March 18, 1949, in Walters, OK. The family moved with her father’s work and they settled in Woodward during her elementary years. In seventh grade, she met John Gibson, a boy from the neighborhood who stole her heart. Donna enjoyed school very much and participated on the debate and speech teams. Donna graduated with the Woodward High School Class of 1967 and went on to further her college education at Southwestern in Weatherford and then Northwestern in Alva. Donna attended Southwestern her freshman year on a debate scholarship. She placed Nationally with the debate team that year. Anyone who knew Donna knew she could win any argument or discussion. In addition, she was 1st runner up Miss Southwestern. Donna transferred to Northwestern to be with John her sophomore year. One year away from home, she realized John was the love of her life and they united in marriage on Aug. 31, 1968, at the First Christian Church in Woodward. She finished her Bachelor of Arts Education degree at Northwestern. They moved to Bartlesville in 1971 and she began teaching 8th grade English at Central Middle School in 1977. In 1985, Donna retired from teaching due to her health, and she and John started J&D Property Management, a company that specialized in real estate investments. After nearly 50 years of loving marriage John preceded her in death on Oct. 11, 2017. Together, Donna and John were virtually inseparable and enjoyed many things like going out to eat, trying new restaurants, going to the movies, and weekend getaways. Once a year they would take a longer trip to visit their daughter Shannon and husband Gary in all the cities they lived in across the United States. Donna was active in Shannon’s many school and sporting activities and loved being a mother. She had a lifelong love for fashion and beauty. She will be dearly missed. Donna is survived by her daughter Shannon Lorenz and Gary of Bartlesville, sister Linda Dobbins of Thomas, OK and family, and brother Pat Patterson and Paulette of Oklahoma City and family. She is preceded in death by her parents, husband, and brother in law Larry Dobbins. In lieu of flowers memorials may be made to Elder Care, 1223 Swan Dr, Bartlesville, OK 74006. Funeral services will be held 2 p.m. on Friday, March 15, at the Davis Family Funeral Home – Walker Brown Chapel, with Chaplain Jsue Wagner officiating. Services are under the direction of Carter Davis and the Davis Family Funeral Home – Walker Brown Chapel. Online condolences and remembrances may be shared at www.DavisFamilyFuneralHome.com.

Donna June Gibson, 69, of Bartlesville, Oklahoma passed away surrounded by loved ones Tuesday February 26, 2019. Donna was born the daughter of Ebert and Cliffogene (Masoner) Patterson on March 18, 1949, in Walters, OK. The family moved with... View Obituary & Service Information

The family of Donna June Gibson created this Life Tributes page to make it easy to share your memories.

Send flowers to the Gibson family.